Eight years ago, the state slashed $84 million targeted toward these programs and many services were eliminated. Now, advocates fear they could be on the chopping block again. 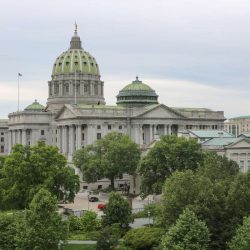 HARRISBURG — Eight years ago, as the state was still recovering from the fallout of a severe economic recession, lawmakers in Harrisburg cut $84 million that counties used to fund programs for people with intellectual disabilities, mental health challenges, and other needs.

At the time, Republican Gov. Tom Corbett’s administration said the state faced a more than $700 million shortfall and that funding for counties was one of the few areas where its hands weren’t tied by federal mandates.

That money was never restored. And in January, county officials urged lawmakers to provide a $42 million increase for mental health services as a downpayment for a sustainable approach, with a 3% annual increase.

Then the coronavirus arrived.

Now, lawmakers are once again facing a huge budget challenge — with a shortfall estimated at nearly $5 billion through June of next year — and county leaders worry they will cut programs that are needed now more than ever.

“It’s a massive concern,” said Brandon Savochka, human services director in Butler County. “It’s also, you know, really kind of tying our hands at a time when we probably really need to be providing more services.”

Funding for the Department of Human Services and the Department of Education make up the largest share of the budget that lawmakers pass each year. This spring, the coronavirus caused revenues to collapse as businesses temporarily shut down.

Amid the uncertainty, Gov. Tom Wolf’s administration and Republicans who lead the legislature agreed to pass a stopgap budget. It provided 12 months of funding for most education line items, as lawmakers said schools needed to be prepared to open for a full school year. But lawmakers funded many other parts of the budget for five months.

Overall, the state needs about $8.3 billion for the remaining seven months to keep even with what was available to spend last fiscal year.

And about $4.8 billion of that falls under the Department of Human Services. A range of programs still need funding for the full year, including Medicaid programs that cost hundreds of millions of dollars, as well as smaller line items that benefit the homeless and survivors of domestic violence.

“Almost every day I’m getting calls from providers panicked,” said Richard Edley, president and CEO of the Rehabilitation & Community Providers Association, which represents providers of health and human services.

Edley said providers hear unsubstantiated rumors of drastic cuts coming, but he hasn’t heard anything specific from lawmakers or the Wolf administration.

“I believe the Department of Human Services doesn’t want to cut a penny,” Edley said. “It’s just, what will happen when they finally develop the budgets? The billions have got to come from somewhere.”

During a call with reporters on Monday, Human Services Secretary Teresa Miller referred to past “budget battles” with lawmakers about spending in the department.

“The most significant cost driver we have in our budget are our seniors, and our people with disabilities, and our long-term care system,” Miller said. “It’s also a population I think everybody wants to support.”

At least publicly, Republican leaders in the House who put the initial budget bills together aren’t offering much insight into how they’ll fund the Department of Human Services. Calls and messages to Jason Gottesman, a spokesperson for the GOP caucus, weren’t returned.

Jenn Kocher, a spokesperson for the Senate Republican caucus, said in an email it’s “premature to get into specific discussions on budgeting.” She said lawmakers are still waiting for the state’s fiscal picture to take shape.

Pennsylvania has about $1 billion remaining in federal CARES Act money that lawmakers haven’t decided how to spend. Right now, they cannot use that money to replace lost revenue. Officials are urging Congress to provide more aid and to allow state and local governments to use the money to help balance budgets.

There’s also uncertainty about just how big the budget gap will be.

The state Independent Fiscal Office in June estimated that Pennsylvania would permanently lose $5 billion in revenue through next summer, but hasn’t updated the estimate since. Director Matthew Knittel said revenues have been stronger than expected since then, but state finances could be hurt by the end of an extra $600 a week in federal unemployment benefits.

Senate Minority Leader Jay Costa (D., Allegheny) said in a statement that his caucus doesn’t support human services cuts and that federal lawmakers need to provide more support to states. Bill Patton, a spokesperson for the House Democratic caucus, said maintaining “lifesaving human services will be a central concern for House Democrats as work on the budget proceeds.”

“I don’t know what they could possibly cut, to be honest with you,” Murt said.

Mark Davis, president and CEO of Pennsylvania Advocacy and Resources for Autism and Intellectual Disability, said he doesn’t think there’s any clear way for the state to fully fund human services programs on its own.

“I just don’t know how they do it without really hurting people more,” Davis said.

While federal CARES Act funding has helped the providers, Davis said the coronavirus also increased expenses and made it more challenging to retain workers.

Flat funding and cuts from nearly a decade ago led some counties to reduce crisis services, cut or reduce mental health job training programs, and cut or eliminate drop-in centers, said Edley of the Rehabilitation & Community Providers Association. He said the cuts also made it harder to pay health and human service professionals competitive wages.

Shortly after the 2012 cuts, 44 out of 67 counties responded to a survey put out by the Pennsylvania Association of County Administrators of Mental Health and Developmental Services. The survey found 89% of counties reduced program and service capacity, while 63% eliminated one or more services, according to a summary the group sent to then-Gov. Tom Corbett in January 2013.

More than a third of the counties said they were reducing or eliminating housing or residential options, and 34% reported employee layoffs. In 20 counties, administrators cut social rehabilitation programs, which are operated by people with a mental illness to support others with a mental illness.

In Montgomery County, the county and providers have discontinued 21 mental health programs since 2007, according to Dr. Valerie Arkoosh, chair of the board of commissioners.

That includes four residential housing programs that served about 70 people, a mobile psychiatric rehabilitation program that helped about 35 people with serious mental illness maintain their current living situation or increase skills to live more independently, and a bridge housing program for people moving off the streets or out of a homeless shelter.

Those cuts also include five contracts, which served about 190 people and helped them train for jobs and get hired.

“The worst outcome would be if they actually cut the budget,” Arkoosh said. “The second worst is if they just keep level funding.”

Mayme Carter, administrator for several human services programs in Bradford and Sullivan Counties, said workers there continue to feel the pressure from funding cuts and increased requirements for services.

“We have sacrificed some important initiatives,” Carter said.