The lobbyist, recently hired by Senate Majority Leader Jake Corman, worked for the firm that runs the lawmaker’s political campaigns. 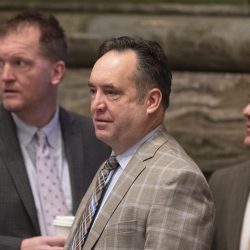 HARRISBURG — Pennsylvania Senate Majority Leader Jake Corman has tapped a top lobbyist with a politically connected Harrisburg firm to serve as his new chief of staff, the latest high-profile example of the cozy relationship between elected officials in the Capitol and special interests trying to influence them.

Corman, a Centre County Republican who is widely considered next in line to ascend to the chamber’s top leadership post, told senators last week in an email that he had hired Krystjan Callahan, a partner at Maverick Strategies, a well-known lobbying firm run by Ray Zaborney, who also runs Corman’s campaigns.

Callahan, 40, was once the top staffer to a Republican leader in the state House of Representatives. For the past five years, however, Callahan has worked for Zaborney, who together with his wife runs a trio of companies known as The Mavericks.

The companies help elect lawmakers and then lobby them once they are in office, a practice that good-government advocates say blurs the line between politics and policy.

Among Zaborney’s marquee clients is Corman, whose campaigns he has run since 2015. Separately, Jen Zaborney, Zaborney’s wife, runs the fundraising arm of The Mavericks and has helped Corman raise millions of dollars over the years.

And last month, The Caucus and Spotlight PA revealed Corman helped raise money at an exclusive event in California for a dark money group launched by Zaborney whose donors — and agenda — are largely a secret. The event coincided with a fundraiser, organized by one of the Maverick firms, that Corman was having at the same resort.

Corman and the group said they did not coordinate the events, which would be illegal.

Corman’s decision to hire Callahan heightens Zaborney’s already vast influence with the Centre County Republican, who is a favorite to take over the top leadership position in the Senate when Senate President Pro Tempore Joe Scarnati (R., Jefferson) retires later this year.

“It’s ripe for undue influence,” said Brian Cullin, chair of Common Cause Pennsylvania. “It is certainly an area that needs to be explored to reform the process. It is problematic to see that level of coziness.”

Jennifer Kocher, Corman’s spokesperson, said Corman hired Callahan because of his qualifications, which she called “second to none.” She said Corman should not be precluded from hiring the best-qualified person simply because of an association with Zaborney.

In an email to Republican senators announcing Callahan’s hiring obtained by The Caucus and Spotlight PA, Corman wrote: “I believe Krystjan’s years of experience in state government will be an asset to me and my staff as we continue to work toward our Caucus goals going into the fall and beyond.”

Callahan, who begins his new job Monday, declined to be interviewed. His salary was not immediately available. Zaborney did not respond to questions.

There has long been a revolving door between the legislature and the lobbying world. But it more often than not has worked the opposite way, with legislative or state government staffers taking their experience and inside knowledge to jobs in private industry or lobbying firms, where they can earn significantly more money.

In Harrisburg, that has given rise to a handful of powerful lobbying firms that trade on having close relationships with the GOP lawmakers who set the legislative agenda.

Aside from Zaborney, dominating that market is Long, Nyquist & Associates. The firm is named for Mike Long, the Senate’s onetime top Republican staffer and strategist, and Todd Nyquist, who served as chief of staff to Scarnati and describes himself on the firm’s website as Scarnati’s “alter ego.”

Like Zaborney’s companies, Long, Nyquist operates both a campaign and a lobbying arm, helping to elect candidates or reelect sitting officials and then lobbying them once they are in office.

Few other firms in Harrisburg offer both political and lobbying services. The DT Firm, run by Dave Thomas, formerly a top Republican lawyer in the Senate, recently added some political work to its company portfolio, which appears to still largely focus on lobbying.

Zaborney and Mike Long have long argued their work is legal and protected by the First Amendment. But critics believe their business model perpetuates a culture of undue access and favoritism. Several lawmakers have, over the years, attempted to ban the dual practice but have not succeeded.

An analysis of campaign finance records shows that firms run by the Zaborneys and Long and Nyquist have together been paid at least $26.3 million since 2011 by legislative candidates, the state Republican party, GOP legislative campaign committees, congressional candidates, and various political action committees.

By contrast, the DT Firm has been paid just under $300,000 for campaign work, including for Republican leaders in both the House and Senate.

Campaign committees for all three firms’ lobbying arms, meanwhile, have given more than $900,000 to GOP legislative leaders and others during that same time frame, the records show.

Because of Pennsylvania’s weak lobbying disclosure laws, it is impossible to know which lawmakers the firms have lobbied, or on what issues. Unlike other states, Pennsylvania only requires that private interests, and their lobbyists, report the total amount of money they spent on lobbying activities, without having to provide any detail.

To be sure, Zaborney, Long, Nyquist, and Thomas’ firms represent a range of clients, from big energy to casinos to unions to the Catholic Church.

Callahan, the onetime top aide to former Republican House Speaker Mike Turzai, was credited in late 2017 with helping persuade his former boss to support a vast expansion of gambling in the state, including legalizing and regulating slots-like machines called video gaming terminals, or VGTs.

Zaborney’s firm, and by extension Callahan, represented the pro-VGT interests. Long, Nyquist represented a key maker and distributor of so-called “games of skill,” which compete with VGT companies and have led efforts to tamp down VGT expansion.

In the end, the legislature only approved VGTs in truck stops. But VGT companies and their advocates have kept up their campaign since then, pushing to allow the terminals in bars, taverns, social clubs, and other venues with a liquor license. Such a move would vastly expand their reach and result in millions in profit.

This past summer, Republicans who control the Senate mounted a feverish, behind-the-scenes push for more VGT terminals. Corman became the effort’s public face.

The campaign ultimately failed but could likely be revived this fall, as the legislature grapples with ways to raise new revenue to offset the economic harm brought on by the pandemic.