By Penn State College of Medicine 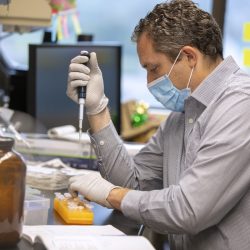 Vrologist Nick Buchkovich and other members of a Penn State College of Medicine research team will continue work on developing a vaccine for COVID-19 using more than $400,000 in funding from the Pennsylvania Department of Community and Economic Development. The goal is to create a vaccine that can provide long-term, protective immunity.
You May Also Like
Facebook Twitter Pinterest Email
Share

HERSHEY, PA – A Penn State College of Medicine research team will continue to work on developing a vaccine for COVID-19 using more than $400,000 in funding from the Pennsylvania Department of Community and Economic Development. The goal is to create a vaccine that can provide long-term, protective immunity.

The project began in March after genetic information about SARS-CoV-2, the virus that causes COVID-19, became available. The funding will allow the project to continue through the fall. Researchers hope that by the end of November, they will have collected evidence that the proposed vaccine can elicit an effective immune response and will have established methods for scaling up production and purification of the vaccine components.

Buchkovich, the principal investigator, said the vaccine concept is built around the design and production of a virus-like particle (VLP) – a non-infectious decoy molecule that is recognized by the immune system but does not produce the symptoms of COVID-19. Unlike SARS-CoV-2, the VLP doesn’t contain the genetic material responsible for the infection and development of COVID-19.

This approach has been used to successfully create immunizations for human papillomavirus, hepatitis B and other kinds of viruses. Buchkovich and colleagues will produce the VLPs by using the same proteins like the ones that make up SARS-CoV-2 that prompt an immune response.

Current immunization strategies for COVID-19 involve the spike (S) protein found in SARS-CoV-2 that is required for the virus to enter cells. Buchkovich’s goal is to incorporate not only the S protein, but three additional proteins into the VLP design to achieve long-term, protective immunity from COVID-19.

“Many of the vaccine candidates under investigation are centered around only S protein,” Buchkovich said. “While this appears to be effective in producing an initial response, the long-term protection from these approaches is not yet known. There is likely an advantage to approaches that include multiple viral proteins organized in the same way as the immune system encounters them on infectious SARS-CoV-2 particles.”

The project has three distinct phases. The first phase, which is coming to a close, involved a series of proof of concept studies where the research team produced and purified the SARS-CoV-2 proteins and constructed a VLP. The second phase will involve optimizing and scaling up the production of the VLP and its protein components and ensuring those products are pure. The third phase of the project will involve testing the proteins and VLP in experimental models and determining if they can produce an appropriate immune response.

According to Buchkovich, a researcher at Penn State Cancer Institute, if the results collected in the final phase show a promising immune response, there is the potential for the vaccine to be developed large scale and tested in a randomized, controlled clinical research trial.

Read more about the funds distributed to Penn State College of Medicine and 22 other entities by the PA Department of Community and Economic Development.

In addition to the support from the PA Department of Community and Economic Development, this research has been supported by matching funds from Penn State College of Medicine.

The researchers disclosed no conflict of interest.