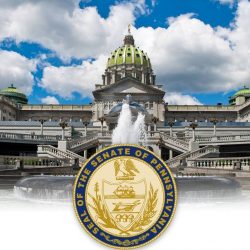 KINGSTON – The House and the Senate Majority Policy Committees will host a joint hearing on the implementation of the Local Resource Manufacturing Tax Credit Program on Thursday, September 24.

“Incentives for manufacturers to build facilities that create jobs are always important, but are critical in the current economy,” said House Majority Policy Committee Chairman Representative Martin Causer (R-McKean/Cameron/Potter). “This hearing will allow committee members to hear from industry leaders who plan to use Pennsylvania energy resources to create jobs and manufacture products here in the Commonwealth.”

The Local Resource Manufacturing Tax Credit law adds incentives for manufacturers to invest in Pennsylvania communities and recruit and employ local workers in the state. The program is available to those facilities that use dry natural gas to produce fertilizer and other petrochemical products.

Businesses would be required to invest more than $400 million in a Pennsylvania facility and create at least 800 jobs in order to qualify for a tax credit.

“People in the district that I represent tell me that their number one priority is jobs, jobs, jobs,” said Senate Majority Policy Committee Chairman Senator David G. Argall (R-Schuylkill/Berks). “This tax credit was approved after a long, bipartisan effort by Senator Yudichak (I-Carbon/Luzerne) and Representative Kaufer (R-Luzerne) and will help deliver crucial energy jobs to Pennsylvania. My friend and colleague Senator Lisa Baker, who represents a large portion of northeastern PA, perfectly summed up this legislation when she described it as an effort to encourage greater use of a state resource to expand manufacturing capabilities and bolster employment.”

More information can be found at policy.pasenategop.com or at pagoppolicy.com.