Will the Debates Skip Climate Again? 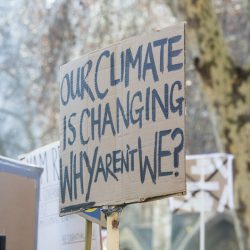 HARRISBURG, Pa. — Environmentalists and elected officials are insisting – so far in vain – that climate change needs to be addressed in every presidential debate this year. The first of three debates between President Donald Trump and Democratic presidential candidate Joe Biden will take place this evening.

Four years ago, moderators asked no questions at all about climate change in any of the presidential debates, and it is not among the six topics chosen by the moderator for tonight’s event. But according to Collin O’Mara, President and CEO at the National Wildlife Federation, this year’s catastrophic wildfires, hurricanes, drought, heatwaves and floods show the impact of climate change is real and it’s happening now.

“To have a presidential debate with so many Americans displaced, so many folks not being able to breathe the air, so many folks struggling to survive, to not have a question is just the height of irresponsibly,” O’Mara said.

Last week, 37 U.S. Senators, all Democrats, signed a letter asking the Presidential Debate Commission to ensure questions about climate change are asked in every debate this year.

The power sector is a major source of greenhouse gas emissions, and the Keystone State has been supplying the nation with coal, oil and natural gas for generations. But O’Mara noted switching to a clean energy economy is good for Pennsylvanians.

“A lot of the clean energy solutions are going to come from Pennsylvania, and so the opportunities for Pennsylvania to create tens of thousands of good-paying new jobs as we make this transition is incredibly important,” he said.

A report from a nonpartisan business group says in 2019, clean energy industries employed more than twice the number of Pennsylvania workers as the entire fossil fuel industry.

“We’re imploring that each of the four of them use at least one question to focus on this issue that is affecting so many people and frankly also creates such a huge opportunity for job creation as we’re trying to figure out ways to grow our economy after the pandemic,” O’Mara said.