Sen. Joe Scarnati sought thousands of dollars for turning over public records of his campaign expenses. 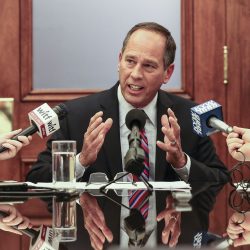 Mike Wereschagin of The Caucus

A Jefferson County judge Wednesday dismissed a lawsuit filed by state Senate President Pro Tempore Joseph Scarnati’s campaign against a Spotlight PA reporter as well as The Caucus and one of its journalists.

But Magisterial District Judge Jacqueline Mizerock ruled that Scarnati’s campaign — not the journalists — should be on the hook for the costs the accounting firm incurred.

“The accounting firm’s cause of action should be against Friends of Joe Scarnati,” Mizerock said after more than an hour of arguments, referencing the name of Scarnati’s campaign committee.

The lawsuit, which Scarnati’s campaign could attempt to refile, could pose a chilling effect on journalists’ and the public’s access to public records. If successful, it could make it easier for public officials to charge excessive fees to news organizations, their staff, and the public, and lead to potentially large court costs if defendants contested the fees in litigation.

“This ruling is a victory for the citizens of Pennsylvania,” said Tom Murse, editor of The Caucus and executive editor of LNP | LancasterOnline. “Allowing our government representatives to charge thousands of dollars for documents that are required by Pennsylvania’s campaign finance law to be readily available for inspection would have made those documents prohibitively expensive and represented a significant blow to transparency.”

The case decided Wednesday involved the DuBois accounting firm Clyde, Ferraro & Co., which was hired in 2006 to keep the Scarnati campaign’s books and to maintain public records that state law requires campaigns to maintain. The journalists requested those records — receipts of payments made by the campaign — as part of a year-long investigation into how Scarnati and other lawmakers obscure their spending.

Over the course of the investigation, the firm tried to bill The Caucus thousands of dollars for copying costs as well as hourly rates for employees and partners that ranged from $50 an hour to $175 an hour, according to testimony by Lisa Zocco. Zocco is both a partner at the firm and Scarnati’s campaign treasurer.

“I have always thought that The Caucus should pay for my time,” Zocco said.

A Department of State employee, however, told Scarnati’s campaign in October 2018 that state election law “plainly and unambiguously does not permit a candidate or political committee to charge for anything other than copying and delivery costs.” Trisha Robinson, chief of the Division of Campaign Finance and Lobbying Disclosure, called the charges “non-permitted costs” in a letter to Lawrence Tabas, then the Scarnati campaign’s lawyer.

After Zocco learned she could not collect hourly charges from The Caucus, she, on one occasion, listed the value of her time as an in-kind contribution to Scarnati’s campaign, she said.

Scarnati’s campaign could refile its lawsuit if it first pays the accounting firm, then seeks reimbursement from The Caucus, Mizerock said.

The Scarnati campaign’s lawyer, Ross Ferraro, said it likely will, and noted Mizerock didn’t rule on whether it was reasonable for the campaign to charge hourly fees when fulfilling public records requests.

“We’ll talk to our clients and then see about refiling,” Ferraro said.

The investigation by The Caucus and Spotlight PA found that from 2016 through 2018, the campaigns of Scarnati and other lawmakers spent $3.5 million that could not be fully traced based on the information they disclosed on regular campaign finance reports. Scarnati’s campaign accounted for almost $246,000 of that, more than any of the nearly 300 campaigns the journalists examined.

The records at issue showed Scarnati’s campaign used donors’ money to pay for, among other things, thousands of dollars in hotel rooms and dinners during a 2016 trip through Europe. On regular campaign finance reports, however, these expenses were often listed as simply “travel” or “lodging” without disclosing where the money was spent.

Hours after The Caucus and Spotlight PA published the original investigation, lawmakers attempted to change the law to make it harder for the public to access the records the news organizations relied upon.

That effort failed, but a refiled lawsuit might achieve the same goal through the courts if it succeeds, media experts said.

“Essentially, you price people out of their government,” David Cuillier, a public records expert and director of graduate studies at the University of Arizona’s School of Journalism, said in September. “It’s really dangerous.”

The suit could also intimidate other journalists. The Scarnati campaign’s decision to name the reporters individually “could inflict long-lasting damage on their personal credit reports,” said Christopher Baxter, editor in chief of Spotlight PA.

“Let this decision stand as an example that reporters and newsrooms across Pennsylvania will not stand down or shy away from accountability and investigative journalism, regardless of who attempts to stand in their way,” Baxter said. “But to be clear, this will certainly not be the last time politicians or special interests attempt to use the courts to chill a free and fearless press.”

Murse added, “While I’m pleased with today’s ruling, I remain alarmed by Sen. Scarnati’s clear attempt to intimidate not just reporters for the Caucus and Spotlight PA but all journalists and citizens who dare to hold candidates for public office accountable.”