By The League of Women Voters of Berks County 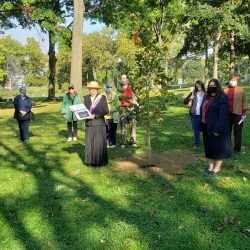 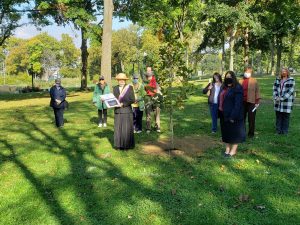 The planting took place on Monday, October 5 at 10 am in Reading City Park.

Renee Dietrich, Chairman of the Centennial Tree Committee stated, during the dedication ceremony “100 years ago in 1920, Woodrow Wilson was President of the United States when the 19th amendment was added to the US Constitution and the League of Women Voters was established. Times were troubled but the new League took root and grew. When planting the Centennial Tree, we remember and honor all those who worked hard to educate and involve people in government and rededicate ourselves to the founding aims and ideals of the League of Women Voters. The League can look back on a proud record of accomplishment.  But we realize that there were many setbacks along the way and the current landscape is scared by turmoil and conflict. There is much distance still to travel until the seeds sown 100 years ago blossom into equality for all.”

The tree planting was made possible by donations from members of the League of Women Voters of Berks County and the Berks County Womens Suffrage Committee. Thanks also to the City of Reading Public Works Department for their assistance.

The plaque will read:

and the founding of the League of Women Voters.