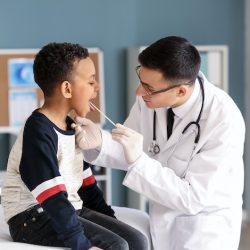 Research shows children with health insurance are likely to grow up to be healthier, more productive adults.

PITTSBURGH — The number of children without health insurance was rising nationwide and here in Pennsylvania before the COVID pandemic, and a new report predicts that trend will continue.

The report, from the Georgetown University Center for Children and Families, says after years of progress getting more kids covered by health insurance, between 2016 and 2019, most of the gains for children achieved through the Affordable Care Act were wiped out. According to Laura Stephany, health policy coordinator with Allies for Children, an estimated 726,000 children nationwide are uninsured – and Pennsylvania has the eighth-highest number in the country.

“We have now 128,000 children across the Commonwealth who are uninsured,” Stephany said. “And our percentage of uninsured children also rose.”

She added those losses occurred when the economy was strong and unemployment was low – before the economic impact of the COVID pandemic.

The increase in uninsured children in Pennsylvania was relatively small, about 2,000 additional children. But Joan Alker, executive director of the Georgetown Center, cautions no increase should be ignored.

“If you look at your state and you see that the number’s going in the wrong direction but it’s not statistically significant, that doesn’t mean that you shouldn’t be worried,” Alker said. “This year, 2020, more kids are probably losing. So, it’s a red flag.”

Research shows children who have health insurance are more likely to graduate from high school, attend college and to be healthier and more productive as adults.

Stephany points out many families have lost health insurance along with parent’s jobs, and the Trump administration’s efforts to undermine the Affordable Care Act will mean more children will be without coverage.

“Pennsylvania has been hit hard by the economic crisis,” Stephany said. “And there is no national effort to inform newly unemployed families about their public coverage options.”

In November, the Trump administration and 18 state attorneys general will ask the U.S. Supreme Court to rule the entire Affordable Care Act unconstitutional.