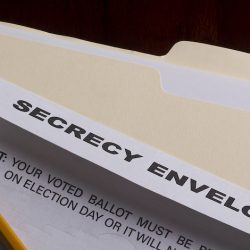 The Pennsylvania state Supreme Court ruled that only mail-in ballots that use the secrecy envelope will be counted.

HARRISBURG, Pa. – Thousands of Pennsylvania votes could be thrown out in November under a strict new rule for mail-in ballots.

Last month, the state Supreme Court handed down rulings that were seen as largely a win for Democrats. They extended the deadline for absentee ballots, allowed more ballot dropboxes and removed the Green Party candidate from the ballot for failing to follow proper procedures.

But the court also ruled that “naked ballots,” mail-in ballots returned without the second secrecy envelope, must be thrown out.

Scott Seeborg is state director of the group All Voting is Local. He said that could be as many as 40,000 ballots in Philadelphia alone, and 100,000 statewide.

“Those numbers are based on 2019 absentee ballot returns,” said Seeborg. “And I’m hoping that all that voter education that the state and lots of other folks have done will drive that number down.”

In 2016, Donald Trump won Pennsylvania by just 44,000 votes. Pennsylvania is one of 16 states that require a secrecy envelope for mail-in ballots.

Seeborg said that in response to that ruling, the Pennsylvania Department of State, county election officials and voting-advocacy groups are urging all voters using mail-in ballots to make sure they use the secrecy envelope and sign the outer envelope before mailing.

“All Voting is Local is putting together a public service announcement campaign and some ads on Facebook,” said Seeborg. “I think that advocates and folks in voter education are really laser focused on this and want to make sure that everybody’s vote is counted.”

Advocates fear that with many people new to mail-in voting expected to vote by mail for the first time because of the COVID pandemic, the number of naked ballots is likely to rise.

Seeborg said multiple bills in the General Assembly aim to try to improve the voting process in Pennsylvania, including a bipartisan measure to allow county officials to start processing mail-in ballots before Election Day.

“Every county is asking for this and the Legislature is unable to unite around that, so I hope they can reach a decision on this and work together,” said Seeborg. “And let’s say I’m cautiously pessimistic for that one.”

Support for this reporting was provided by The Carnegie Corporation of New York.