The state House unanimously passed long-awaited changes Monday, but Senate leadership refused to advance it, leaving many landlords and families on the financial brink. 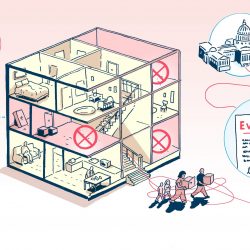 HARRISBURG — A last-ditch attempt to fix Pennsylvania’s ailing COVID-19 rent relief program hit a wall Wednesday after Senate Republican leadership did not advance legislation, making it likely many landlords and families on the financial brink will not get the aid they desperately need.

The failure came as a surprise even to House Republicans, who joined with Democrats in unanimous support of a bill passed Monday to make critical and long-awaited changes that would allow more people to take advantage of the $150 million program.

“We all thought everyone was in agreement,” said Rep. Sue Helm (R., Dauphin), the sponsor of the House bill and chair of the Urban Affairs Committee. “We were so hopeful that the bill would go through.”

As a result of the Senate’s inaction, the relief program will probably expire Nov. 4 having distributed just a fraction of the money allotted to it. Jennifer Kocher, a spokesperson for Senate Republicans, said changes made to the program earlier this month by Gov. Tom Wolf “negated the need” for the legislation.

Lawmakers in both parties, as well as tenant and landlord groups, disagreed.

Wolf allowed landlords to enter into payment plans to recoup rent from tenants above and beyond the program’s $750 monthly cap. Previously, landlords who participated had to forgive any rent owed in excess of the assistance payments, which was a significant deterrent.

But obstacles that require legislative fixes remain. Chief among them: doing away with the $750 cap altogether, in favor of a more generous amount that varies from region to region. The House bill also would have reduced paperwork for applicants and delayed the deadline to Nov. 13.

Even if the legislation had passed this week, the changes would have had only a few weeks to take effect. By state law, the program’s funding must be distributed by the end of November.

At the end of September, less than $10 million of the $150 million allocated to the program under the federal CARES Act had been paid out, signaling that the program may end with money leftover, despite widespread need. Several counties — including Allegheny, Lancaster, and Philadelphia — have increased the amount of assistance tenants can receive by bolstering the money from the state with their shares of CARES funding.

Thousands of families across the state are at risk of losing their homes amidst the economic crisis caused by the coronavirus pandemic. A federal order protects some tenants from eviction until the end of the year, but advocates warn of a surge in eviction filings come January.

While moratoriums delay eviction filings, relief programs directly provide aid to help keep tenants in their homes. An estimated 15% of Pennsylvania renters will face eviction in January 2021, according to a study of census data commissioned by the National Council of State Housing Agencies.

“If there is a lot of money that hasn’t been spent, it doesn’t reflect a lack of need,” said Phyllis Chamberlain, executive director of the Housing Alliance of Pennsylvania. “It really reflects a program that had too many requirements.”