The high court’s unanimous ruling makes it far less likely there will be drawn out challenges to mail-in ballots based on signatures come Election Day. 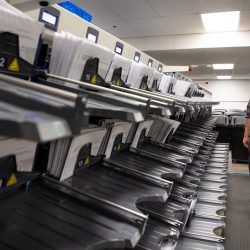 In a 7-0 decision, the high court said there are no provisions in the state’s election code that specifically require counties to match voters’ signatures. And, the court noted, in writing the law, the legislature could have explicitly mandated signature matching but did not.

“We decline to read a signature comparison requirement into the plain and unambiguous language of the election code,” the justices wrote in their decision.

Friday’s ruling stemmed from a request earlier this month from Pennsylvania’s top election official, Kathy Boockvar, to bar county election officials from rejecting mail-in ballots solely on the basis of perceived differences in a voter’s signature.

The decision is the latest in a crush of litigation in the weeks leading up to the Nov. 3 election, as Republicans and Democrats wage pitched battles over gray areas in Pennsylvania’s year-old law that greatly expanded the ability to vote by mail.

This year, election officials expect up to 3 million people to vote by mail. Already, more than 1 million Democrats have returned a mail-in or absentee ballot, as have nearly 300,000 Republicans.

The two sides are still at odds in a separate case involving an extension to the deadline for counties to accept and count mail-in ballots, a matter that has the potential to land before the U.S. Supreme Court for a second time.

State officials have argued that voters’ signatures change over time due to age, medical conditions, and other reasons. Allowing counties to reject ballots based on a subjective review of signatures had the potential to lead to legitimate ballots being tossed and voters being disenfranchised, Boockvar said.

The campaign of President Donald Trump had originally asked a federal judge to permit counties to engage in signature matching, a case that was dismissed earlier this month. Boockvar nonetheless asked the state Supreme Court to weigh in on the matter in the hopes of putting it to rest.

Over the last few months, rulings by the state’s seven justices have set the tone for how much flexibility Pennsylvanians have when voting by mail.

In a landmark decision last month, the high court upheld the use of drop boxes and satellite election offices, both touted by voting rights groups as key to helping counties more quickly and effectively gather and process a record number of mail-in ballots.

The high court also extended the deadline for mail-in ballots to be received by county election offices in order to be counted. Initially, ballots were due by the close of polls on Nov. 3. The justices, in a 4-3 decision, allotted an extra three days for them to be received, as long as they are postmarked by Election Day.

The justices also ruled that counties can count ballots that have an illegible or missing postmark unless there is convincing evidence they were mailed after Election Day.

Republican leaders appealed portions of the case to the U.S. Supreme Court, including asking for a halt in the three-day extension for counting ballots. The justices deadlocked on the case, resulting in its dismissal.

But earlier this week, a GOP congressional candidate and four voters filed a new lawsuit in federal court in Pittsburgh, seeking to block the three-day extension. They argued that extending the deadline was unconstitutional and that the state Supreme Court usurped the authority of the legislature to make changes to election law.

The new lawsuit, if appealed, could land before the U.S. Supreme Court, giving the justices another chance to weigh in. Some legal experts said the imminent confirmation of Judge Amy Coney Barrett, Trump’s nominee to replace Justice Ruth Bader Ginsburg, could tip the scales on the issue in favor of Republicans.