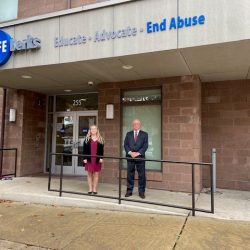 Whether you know it or not, someone important to you has been the victim of sexual violence. Despite being one of the most invasive and traumatic experiences an individual can have, sexual assault is one of the crimes that is most underreported to law enforcement.

Safe Berks and the District Attorney’s Office have joined forces to change that in Berks County.

While Safe Berks and the DA’s Office have a long history of working together to serve crime victims, their partnership has recently expanded with the creation of a County-wide Sexual Assault Response Team (SART). Formation of the SART Team was formally approved by District Attorney John Adams last year, and is headed by Meghan Sager, the Safe Berks SART Coordinator. The Team had its first meeting in July 2020 and meets every month.

“Our Office recognizes the importance of having a multidisciplinary approach to the investigation of sexual abuse and that is what the SART team provides,” said Adams. “Safe Berks provides a safe haven and support for victims of domestic violence and sexual assault. When a victim’s emotional and physical well-being is cared for, it makes our job of providing justice for them easier. Working closely with Safe Berks is a logical partnership that we are happy to continue.”

According to the Rape, Abuse, and Incest National Network (RAINN), 1 in 3 women and 1 in 6 men will be the victim of a sexual assault in their lifetime. There is an average of 293,066 individuals ages 12 or older who are victims of sexual assault each year in the United States. This means a sexual assault occurs every 98 seconds in this country. However, most sexual assaults are not reported to police, with only an estimated 230 out of every 1,000 reported, said Sager.

There exists in our society either an actual or perceived stigma associated with sexual assault, that a victim may be lying or was somehow responsible for their own victimization. This perception is often a major factor in a victim’s decision to report or not report. Many survivors often blame themselves or feel embarrassment or shame, and these negative feelings are reinforced by public reaction to disclosures of sexual violence.

“In all our work, we aim to eliminate the stigma and stereotypes which still cause many victims of sexual and interpersonal violence to suffer in silence,” said Beth Garrigan, Safe Berks CEO. “This further traumatizes victims, who have already suffered profound trauma, and also protects abusers, leaving them free to assault additional victims. We want victims of sexual assault to know this was not their fault, and help is available.”

In Berks County, the number of sexual assault victims reporting to local hospitals has increased significantly since the COVID-19 pandemic struck and quarantine restrictions were put in place, said Sager. “Many of the victims disclosing sexual abuse at the local hospitals choose to never report to law enforcement,” said Sager. “The Berks County SART Team will work to make reporting sexual assault to law enforcement and participating in the prosecutorial process less traumatic for victims.”

One of the goals of the SART Team is to prevent revictimization of survivors who have already endured significant trauma. The Berks County SART Team members are all trained professionals experienced in working with victims of severe trauma.

“We want victims to know that the District Attorney’s Office and the police are here to help victims,” said Adams. “The DA’s Office recognizes that reporting a sexual assault and being involved in the criminal justice system is not an easy thing for a victim. We strive through our own victim/witness unit and our partnerships with Safe Berks and other agencies, to ease some of the anxiety and fear surrounding the process by educating and informing victims of the steps throughout a case. We work closely with our local police departments to provide training and resources so that we can successfully bring justice to survivors of sexual assault.”

Sager spent time studying SART teams in other counties as part of her preparation to coordinate the Berks County SART Team. SART Teams are multidisciplinary, usually comprised of individuals from the District Attorney’s office, the County Rape Crisis Center, other members of law enforcement, and hospital personnel – particularly Sexual Assault Nurse Examiners (SANE) nurses. The purpose of a County SART is to provide a coordinated community response to victims of sexual violence, in order to minimize trauma to the victims, while promoting improved investigation into and successful prosecution of sex crimes.

Safe Berks is honored to partner with all the members of the SART Team, including Captain Cheryl Pentheny, Captain of Investigations at Reading Police Department, and John Solecki, STOP Detective. “They have both been willing to assist in any way possible,” said Sager. “Their continued partnership and input will create stronger relationships with law enforcement that will be extremely important when responding to sexual assault in Berks County.

The COVID-19 pandemic did slow down the progress of the SART team, Sager said. The original meetings, planned to take place in the spring, had to be cancelled. In the summer of 2020, the members decided to utilize remote technology to hold the monthly meetings.

“Safe Berks is very excited about this new initiative and opportunity to partner with the DA’s office and other community stakeholders to improve our community’s response to sexual assault victims,” said Diane Ellis, Esq., Director of Legal Services at Safe Berks.

Core Team Members of the SART Team include:

Safe Berks provides free and confidential services to survivors of domestic violence and sexual assault 24 hours a day, 365 days a year. Our services are available in English and Spanish and will be translated into any other language needed. Services include shelter, counseling, legal services, medical advocacy, and education and outreach. The Safe Berks 24-Hour Hotline number is 844-789-SAFE (7233), or text SAFE BERKS to 20121.