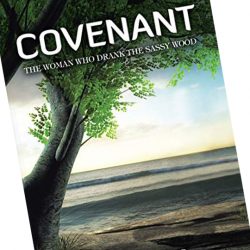 Michael Gonkerwon Siaway, a Penn State Berks alumnus originally from Liberia, has written a book titled Covenant: The Woman Who Drank the Sassy Wood. The book explores the tradition of arranged marriage and how women are treated in these situations.

When asked why he wrote the book, Siaway explained that he wanted to give readers a look into the customs of other cultures. He published the book under the pen name Zlando, which means “one God” in the Liberian dialect of Dan/Gio.

The publisher’s website explains that in cultures where marriage covenants are typically arranged by parents, romantic feelings and true love seldom enter into the negotiations. Those emotions are born later, after the marriage is consummated. In Covenant: The Woman Who Drank The Sassy Wood, Michael G. Siaway reveals how the woman is treated in most arranged marriages. The culture would insist that the marriage abides by the tradition in which the marriage is covenanted or negotiated. In most cultures, the privilege to make choices or decisions is denied to women.

In the book, Duah reports that his beloved daughter, Yei, is dead. She had been in an arranged marriage for 20 years. Under pressure from Duah and growing protests from towns people, Yei’s mother, Tenneh, is officially accused of killing her own daughter. As a custom of the town for any mystical event or occurrence, the town’s remedial ritual must be performed to explore the unknown and unearth the truth. Tenneh is the one who is forced to perform the ritual to prove her innocence.

Siaway graduated from Penn State Berks in 2012 with a B.A. in Global Studies. Born in Liberia, West Africa, he emigrated to the United States as a refugee in September 2003, through the Catholic Charities Refugee Services of Camden, New Jersey.

He is a founder of “Raising Lazarus,” a nonprofit organization based in Reading, Pa., whose mission is assisting immigrants who speak English as a Second Language in improving their speaking and writing skills to help them find employment and attractive living options. Siaway is also a substitute teacher at Berks County Intermediate Unit in Reading. In the past, he served as a primary teacher for the Peace Corps in Burkina Faso, West Africa in 2016.