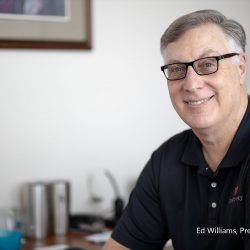 Williams is dedicated and involved in the Berks County community as well. He served on the Greater Berks County Food Bank from 2002-2016 and currently serves on the Rudden Family Foundation Board and the St. Ignatius Loyola Finance Committee, is a BCIAA Volleyball Officials Board member and has served on the Greater Reading Chamber of Commerce Business & Community Advocacy Council.

“Through his leadership, dedication and support, Ed has energized and strengthened the credit union movement within his community and nationwide, making an ever-lasting impact within the industry,” said Robert Shaner, Chairman of the Board of Directors, Discovery FCU. “And, his unwavering devotion to Discovery and its members is impeccable. The entire Board of Directors and staff at Discovery is very proud and honored by his achievements and this distinguished  recognition.”