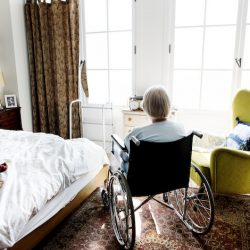 HARRISBURG, Pa. – Recent polling shows Social Security and Medicare are top issues for older voters of both parties in Pennsylvania, and their votes could decide the election.

The poll, conducted by AARP, shows 88% of older voters are more likely to support candidates who promise to protect Social Security and 90% want candidates to support allowing Medicare to negotiate drug prices with pharmaceutical companies.

Joanne Grossi, Pennsylvania state president of AARP, said seniors are a voting bloc which wields a lot of clout.

“Sixty-one percent of people who voted last time were over the age of 50, so we come out to vote,” Grossi observed. “Candidates need to care about the issues we care about if they want to win in Pennsylvania.”

More than half of Pennsylvania voters 50 and older who were polled do not support the way the Trump administration has managed the COVID pandemic.

And Grossi pointed out concerns about becoming infected have grown.

“Though, interestingly enough, 61% of the over-50 population said they actually plan on voting in person,” Grossi noted. “So, if they do have concerns, I think they’ve made some plans on how to make sure they stay safe.”

The survey also found fewer than half of older Pennsylvanians say they would get a COVID-19 vaccination.

The sharp divide between Republicans and Democrats may be most evident in the close support for the presidential candidates but it isn’t consistent across the older demographic.

“That number changes dramatically if you’re looking at voters over the age of 65,” Grossi added. “For them it’s 57% support Joe Biden and 40% support Donald Trump.”