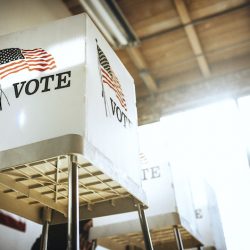 PHILADELPHIA – United States Attorney William M. McSwain announced the results of a review of all election polling places in the Eastern District of Pennsylvania to determine their compliance with the Americans with Disabilities Act (ADA) of 1990. This massive undertaking, which was announced on February 19 of this year, involved nine counties and was the Department of Justice’s first-ever ADA review of an entire district. The ADA prohibits discrimination on the basis of disability in all programs, activities, and services provided by public entities. The ADA requires that public entities provide voting facilities that are accessible to people with disabilities.

As part of the review, election officials in Berks, Bucks, Chester, Delaware, Lancaster, Lehigh, Montgomery, Northampton, and Philadelphia counties were asked to complete survey questions pertaining to polling place accessibility in their county. The United States Attorney’s Office then followed up with the county officials to address any access issues and to make sure each county remedied those issues. All nine counties responded to the survey and have now either resolved those issues or are in the process of remediating them.

By way of example, Lancaster County was one of the first counties to respond to the survey, demonstrating full accessibility and an extensive ADA plan in place for the county.  Delaware County identified access issues with the entrance to Lamb of God Church in Havertown. Through a bipartisan agreement, the county was able to move that polling place to an accessible location at Chestnutwold School. Bucks County identified an inaccessible polling place in Lower Southampton, and the county is in the process of remediating that situation.  Philadelphia County is currently finalizing its review and expects to have all issues resolved before election day.

“Polling place accessibility for the disabled is a critically important issue and one of the many ways that my Office is working hard to provide a free and fair 2020 election,” said U.S. Attorney McSwain. “People with disabilities deserve equal access to polling places, and we are committed to making sure that they have it. We also appreciate the seriousness with which the counties approached our review, during this 30th anniversary of the Americans with Disabilities Act.”

Any citizen with ADA-related polling place concerns in the Eastern District of Pennsylvania is encouraged to contact Assistant U.S. Attorney Jacqueline C. Romero, Civil Rights Coordinator, at 215-861-8200 or [email protected].