The delay was not inevitable, but instead the product of a contentious disagreement between state politicians. 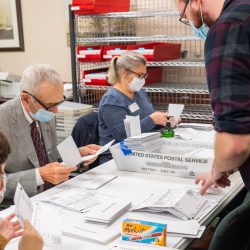 HARRISBURG — It didn’t have to be this way in Pennsylvania.

Yes, the state’s universal mail voting law is only a year old. Yes, this is the first general election test. And yes, the coronavirus pandemic caused a tidal wave in mail ballots, with more than 2.5 million cast.

Despite all of that, the delay in results from Pennsylvania — now the focus of an eager nation awaiting the outcome of the presidential election — was not inevitable, but instead the product of a contentious disagreement between state politicians.

For months before the election, county leaders across the state — Democrats and Republicans — pleaded with the GOP-controlled legislature to give them time to process mail ballots before Election Day. That includes verifying ballots, opening them, flattening them for a voting machine, and tabulating them.

But in the end, the legislature did not pass a bill Wolf said he would sign. Here’s the back story:

Under the law, mail ballots cannot be processed until Election Day. But for a moment in June, it seemed like the stars aligned. The GOP House advanced an election reform bill that would allow pre-canvassing to begin 21 days before Election Day.

By the time the state House approved the bill, however, the window was shortened from 21 days to three. And then came what Democrats considered poison pills: Rather than passing clean legislation, Republicans wanted unrelated concessions, including relaxing residency restrictions for partisan poll watchers and banning mail drop boxes — and the latter was a non-starter for Democrats.

Wolf said he would veto the bill.

The measure went to the state Senate, where it has lingered unchanged. Negotiations stalled in mid-September, after the state Supreme Court allowed counties to receive mail ballots up to three days after Election Day, so long as they were postmarked by Nov. 3. In late September, Republicans accused Wolf of refusing to work with them. “His obtuse and continued refusal to work with legislative Republicans is the main obstacle to any changes,” a House GOP spokesperson said.

The sentiment from Republicans was reflective of a bitter summer between them and Wolf focused on the response to the coronavirus. The GOP has fought fiercely — through legislation and court challenges — to lift the remaining restrictions on gatherings and restaurants, arguing decisions by the Wolf administration were being made haphazardly and not based on the data.

But Wolf didn’t give an inch, saying the measures were critical to slowing the spread of the coronavirus and accusing Republicans of playing games with people’s lives.

In early October, it looked like the Wolf administration and House GOP were negotiating. But by mid-October, those talks had collapsed. Republicans again contended Wolf did not “put anything on the table that can get through our caucus.”

But Wolf countered that nothing was stopping Republicans from passing a clean bill allowing pre-canvassing.

As all of this unfolded, President Donald Trump held rallies in the state warning, without evidence, that Wolf and Democrats would try to steal the election after Election Day. But the reality was exactly what we see playing out now: That counting the votes, and getting to a winner, would just take longer.

Rep. Kevin Boyle (D., Philadelphia) said claims the Wolf administration did not try to work with Republicans are “lies.”

“We were literally begging them to come up with a compromise, and even a week before the election, the Wolf administration offered them contiguous county poll watcher certificates — just put three days of pre-canvassing,” Boyle said. “So it’s just an utter mystery.”

Boyle, also minority chair of the House State Government Committee, said he tried several times to introduce amendments to allow for pre-canvassing. He also put up a clean pre-canvassing bill, but it was not considered.

On Wednesday, Senate Majority Leader Jake Corman (R., Centre) told reporters his caucus did not continue working on legislation because lawmakers didn’t trust the state’s top election official, Kathy Boockvar, to implement the measure properly. Corman and the Senate’s other top Republican, Joe Scarnati, are calling on Boockvar to resign over guidance she provided to counties ahead of Election Day.

Corman also said Wolf “needs to take some responsibility” for vowing to veto the House measure.

“That’s not the issue of the day, that’s the issue that they want you to talk about,” he said of pre-canvassing. “Most counties didn’t need it. I think we’re fine.”