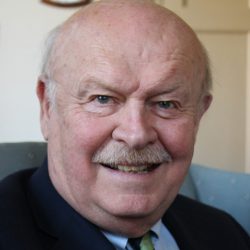 WYOMISSING, Pa. — Penn State Berks will hold a virtual celebration to honor Chancellor R. Keith Hillkirk, who will be retiring at the end of this year. This event is scheduled for Tuesday, December 1, from 4–6 p.m. and will be held via Zoom. Attendees must register in advance at https://berks.psu.edu/retirement-RSVP. They will receive connection information via email after registering.

The event will begin with remarks by University leaders, members of the Penn State Berks community, and others. There will be time at the end for attendees to make remarks as well.

Hillkirk originally planned to retire on Aug. 1, 2020, after more than 15 years of service to Penn State. Due to the coronavirus pandemic, he agreed to remain in his role through the end of this year. He joined Penn State Berks as chancellor in July 2011. Previously, he served as chancellor of Penn State Schuylkill from 2005 to 2011.

Initiatives that Hillkirk has overseen as chancellor at Berks include the Gaige Technology and Business Innovation Building, a LEED gold-level certified building, dedicated shortly after he arrived. In addition, the Perkins Plaza, an outdoor seating area with a water fountain and clock tower located outside the Perkins Student Center, was constructed; and the Luerssen Building underwent a major renovation, adding new, state-of-the-art science labs, and was renamed the Luerssen Science Building. Currently plans are being finalized for a significant expansion and renovation of the Beaver Community Center, which began in the spring of 2020.

Penn State Berks also opened the doors to two entrepreneurship and economic development centers: the Flemming Creativity, Entrepreneurship, and Economic Development Center on campus, and the Berks LaunchBox, located within the GoggleWorks Center for the Arts in downtown Reading, which is part of Invent Penn State, a $30 million commonwealth-wide initiative to spur economic development, job creation, and student success launched by Penn State President Eric J. Barron in 2016.

In addition to growth in physical plant, the number of four-year baccalaureate degree programs that the college offers increased to 20 during Hillkirk’s tenure.

Despite the many responsibilities that come with his position, Hillkirk is always present and engaged on campus. In fact, he often can be seen walking to campus from his home in Bern Township, taking a short jaunt across a footbridge and through Gring’s Mill Recreation Area. He even teaches a fly fishing course — an endeavor that combines his love of teaching with his love of the sport.

Hillkirk has been a strong advocate for relieving student debt, with two major scholarships established under his tenure: the Cohen-Hammel Fellows Program, a comprehensive new scholarship program for outstanding Penn State Berks undergraduates, and the 60th Anniversary Scholarship, funded by the college’s 60th anniversary gala.

In 2017, Hillkirk and his wife, Suzanne, created an endowment, the Hillkirk Family Program Endowment for Ethics and Sustainability. The name reflects the passion that the Hillkirks have for these two priorities. This new fund will provide resources for programs and initiatives that will enrich the campus community in creative and meaningful ways.

“It’s been an honor and privilege for Suzanne and me to serve Penn State through our work at Penn State Berks for the past nine years and previously at Penn State Schuylkill,” stated Hillkirk. “The mission of the Commonwealth Campuses to serve students, families and communities across Pennsylvania is important, and we are thankful to have had the opportunity to share this time with such dedicated faculty, staff and alumni.”