Two women just made history in the Pa. legislature. Will that be the last thing they have in common?

Sen. Kim Ward, a Republican, is the first woman to become majority leader in the General Assembly’s history, while Democratic Rep. Joanna McClinton will be the first Black woman to lead a caucus. 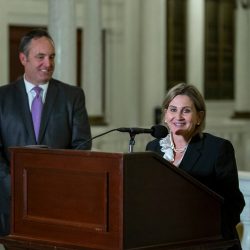 HARRISBURG — One is a former health-care worker and political veteran from Westmoreland County. The other is an ex-public defender and relative newcomer from Philadelphia. Two different women, two different parties, two different sides of the state.

Both made history last week when their colleagues picked them to lead their caucuses in the Pennsylvania legislature.

But they’ll likely find themselves on opposite sides of key issues as a deeply divided state continues to grapple with the COVID-19 pandemic and its economic fallout.

Sen. Kim Ward, a Republican, is the first woman to become majority leader in the General Assembly’s 338-year history, replacing Centre County’s Jake Corman. Now, she’s prepared to use her powerful post to fight for limited government and to claw back Gov. Tom Wolf’s emergency powers.

“I believe so far in my time in the Senate, my priorities have been things that make life easier, and I’m not saying that in a cliche way,” said Ward, a former respiratory therapist first elected to the chamber in 2008. “I’m going to put a laser beam on priorities of the caucus and try to work closely with [the House] to see where we can find some common goals.”

In the House, Rep. Joanna McClinton of Philadelphia was chosen as Democratic minority leader, becoming the first Black woman to lead a caucus in either chamber. She takes the reins after a bruising election for House Democrats, who lost a net of three seats — including one held by the current minority leader, Frank Dermody, of Allegheny County.

But McClinton said Democrats would not waver from advocating for their priority issues, including funding public schools in a more equitable way, advancing police reform, and raising the minimum wage.

“I was a tip wage worker all through law school,” McClinton said, referring to the separate minimum wage that applies to restaurant workers. “I waited tables and I know what that pressure is like, wondering whether you can pay your bills off of $2 and some change.”

The stark contrast between the priorities of these two leaders exemplifies the deep division in the legislature, and an emboldened Republican Party that further consolidated its control after the most recent election. Partisanship in the General Assembly has been on the rise — mirroring national trends — while the actual work it gets done has been decreasing.

The chilly relationship between Republicans and Democrats, including Gov. Tom Wolf, became downright arctic over the past year as the administration claimed enormous emergency powers and took drastic measures — including shutting down businesses — to curb the spread of the coronavirus. Health officials have widely credited those moves with saving lives.

But Republicans throughout the year, and continuing now, counter that the administration failed to strike a balance between public safety and the rights of individuals and their businesses. GOP lawmakers have attempted to use every tool at their disposal to diminish Wolf’s power, arguing it amounts to an open-ended assault on the role of the legislature in governing.

Further exacerbating divides, Republicans in the days after the election called for investigations and fueled unfounded fears of widespread fraud. They made these claims despite the fact that GOP candidates performed exceedingly well across the state.

Ward told Spotlight PA she will work with the Wolf administration once there are more checks and balances in place. She said a state Supreme Court ruling that allowed certain counties to accept mail ballots until Nov. 6 — along with state guidance on “cured” ballots — unfairly bypassed the legislature. 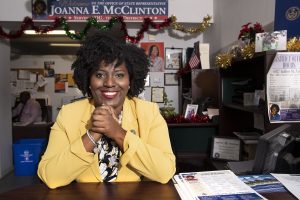 “We are divided,” she said of the Wolf administration and Republicans. “I’d like them to work with us instead of just shutting everything down.”

Ward this summer authored a measure that — if approved again next session — would ask voters to change the constitution to require the General Assembly’s approval to extend an emergency disaster declaration after 30 days. The House and Senate attempted to force Wolf to end his emergency coronavirus declaration, but was blocked by the state Supreme Court.

“Kim is one to have the tenacity to keep working on a new issue until she has some type of resolution,” Stefano said.

While legislative Republicans are grappling with an unusual problem — being somewhat powerless amid the ongoing state of emergency — Democrats in the House have been in the minority for a decade, unable to advance much of their desired agenda.

McClinton, a former public defender who began her career in politics in 2013 as chief counsel to Sen. Anthony Williams (D., Philadelphia), recognizes that it will be difficult to get her caucus’ priorities across the finish line.

Still, she said she intends “to use my relationships on the other side of the aisle” to advance a key issue: criminal justice reform.

She pointed to Walter Wallace Jr., a Black man with mental illness who was shot and killed by Philadelphia police as he was walking toward officers and holding a knife.

“His parents live in my district,” McClinton said. “He grew up in my district, was killed in my district, so there’s no way police reform is not on my personal legislative agenda. And of course, it’s a part of the larger conversation of changing the criminal justice system.”

“Frankly,” McClinton continued, “my constituents back home have made this a priority because we have been traumatized.”

After allowing reform bills to languish for years, the GOP-controlled legislature passed two police-related measures this summer following nationwide protests — including by lawmakers on the House floor — sparked by the police killing of George Floyd in Minnesota. But other bills that offered more significant changes, including legislation that would limit when officers can use deadly force, have stalled or were not considered at all.

“As I think about how we move the ball forward and continue to pursue an agenda that centers working people and centers marginalized people,” said Rep. Malcolm Kenyatta (D., Philadelphia), “we really couldn’t ask for better leadership at this time.”