A resolution tasks a bipartisan committee that holds subpoena power with compiling a report on issues and “inconsistencies,” and hiring a firm to audit the vote. 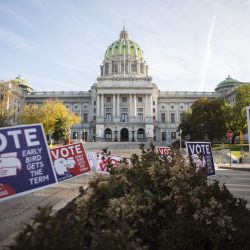 Though Republicans performed exceptionally well in down-ballot races — flipping two row offices and maintaining their legislative majorities — both rank-and-file members and leadership have repeatedly accused the Wolf administration and state Supreme Court of attempting to undermine the election’s integrity.
You May Also Like
Facebook Twitter Pinterest Email
Share

HARRISBURG — State House Republicans on Wednesday moved a step closer to launching a review of the 2020 presidential election in Pennsylvania, though the process would not be completed until after the state’s vote is officially certified.

The resolution tasks a bipartisan committee that holds subpoena power with compiling a report on issues and “inconsistencies,” and hiring a firm to audit the vote to ensure “the accuracy of the results,” the measure’s sponsor said.

While the Department of State plans to undertake a similar review, GOP lawmakers said the work outlined in the resolution would be independent from Secretary of the Commonwealth Kathy Boockvar, who they noted is named in several election lawsuits brought by the Trump campaign.

Though Republicans performed exceptionally well in down-ballot races — flipping two row offices and maintaining their legislative majorities — both rank-and-file members and leadership have repeatedly accused the Wolf administration and state Supreme Court of attempting to undermine the election’s integrity.

Gov. Tom Wolf, in turn, has accused the party of trying “to undermine confidence in the results of the election.”

During a Wednesday meeting of the House State Government Committee, Republicans said their top concern was not voter fraud or changing the outcome of the presidential election, but the different ways counties handled deficient mail ballots and provisional ballots, as well as any inconsistencies with how close poll watchers were allowed to canvassing tables.

“I don’t know why people keep mentioning [that] this is about fraud,” interim committee chair Rep. Seth Grove (R., York) said during the meeting. “It’s about the process and making sure we have accountability within the election process,”

Democrats, meanwhile, called the resolution unconstitutional and said it would be costly to taxpayers.

“I don’t believe it is constitutional for the House of Representatives — by resolution and not through legislation — to direct any agency or county to do anything,” Rep. Malcolm Kenyatta (D., Philadelphia) said during the meeting.

The resolution passed 15-10 along party lines, and the full House is expected to take up the measure Thursday. It does not require approval from Gov. Tom Wolf.

In 2019, the legislature undertook its first major rewrite of the Election Code in decades and passed no-excuse mail voting with bipartisan support. But lawmakers did not permit counties to begin processing mail ballots before Election Day — something county officials repeatedly asked for in the lead-up to the Nov. 3 election.

House Republicans put forth a proposal to allow three days of “pre-canvassing,” but also sought to ban satellite drop boxes and allow partisan poll watchers to serve in any county. Wolf vowed to veto the measure, and negotiations eventually broke down completely.

As a result, the vote count took several days, and President Donald Trump falsely claimed an early victory and sowed doubt in the eventual results.

While state Republicans have repeatedly stated they have no evidence of fraud, they have said constituents are concerned about wrongdoing. They blame the confusion on a state Supreme Court ruling that extended the deadline to accept mail ballots by three days, as well as guidance from the Department of State allowing counties to share information with political parties about voters whose ballots had problems.

Kenyatta on Wednesday said any confusion “has been stoked” by Republicans.

“The confusion and chaos derived in large part from our inability or unwillingness to actually do something about pre-canvassing the results, which bipartisan commissioners requested that we do,” he said.

The County Commissioners Association of Pennsylvania on Tuesday called on Wolf and the legislature to convene the bipartisan Election Law Advisory Board to offer recommendations on improvements.

“It is time to put political differences aside and resolve to make meaningful improvements to the Pennsylvania Election Code,” Lisa Schaefer, executive director of the group, said in a statement. “We must get to work quickly and we must do so together, to roll up our sleeves well before next May to make meaningful changes”

But, importantly to Republicans, that panel does not have subpoena power and includes Boockvar as a member.

“Subpoena power is always just in case you can’t get somebody to cooperate,” said Rep. Russ Diamond (R., Lebanon), who represents House Speaker Bryan Cutler on the board. “I would think that a definitive process of gathering information is to first ask nicely, right? And if you can’t get cooperation, well, then maybe you’re gonna have to issue a subpoena.”