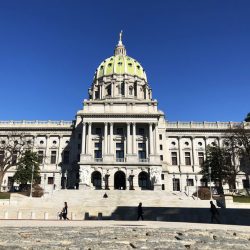 “I think it’s an ingenious piece of legislation frankly.” That’s what CEO Perry Babb of KeyState Natural Gas Synthesis said about the law which was designed to encourage manufacturing and investment in good paying jobs.

In order to qualify for the tax credit, each business must invest more than $400 million into a Pennsylvania facility and create at least 800 jobs. Pennsylvania has seen an energy boom in the last few years and is now the third largest net supplier of energy to other states.

“This bill was an achievement in bipartisan collaboration to improve the economy of northeastern Pennsylvania,” said Senator Argall. “My friend and colleague Senator John Yudichak (I-Carbon/Luzerne) worked tirelessly for months to achieve an agreement between Republicans and Democrats, business and labor, the House, the Senate, and the Governor. The result of all this hard work was a new law which will create thousands of good paying jobs to sustain Pennsylvania families. As a major energy producer, Pennsylvania is helping to drive this nation into prosperity and the jobs created along the way have great potential to assist our more economically depressed areas.”

This edition of the Argall Report will air on BCTV (Comcast – Channel 15 and Service Electric – Channel 19) and stream live at www.bctv.org on Thursday at 8 p.m. and Friday at 6 p.m.