Everyone needs forests. Forests exhale the air we breathe, filter the water we drink, and stabilize the earth we walk. Eighty percent of the world’s terrestrial biodiversity call these forests home and, next to oceans, forests are the world’s largest storehouses of carbon, a critical service to mitigating the global climate crisis.

Yet, each year, the world permanently loses an estimated 12.4 million acres of forests.

Re-growing these forests, thus preserving their life-giving services, will require a global effort. Our global impact begins locally. For the next month, the Understory will highlight Berks Nature’s most recent efforts to replant trees across Berks County for the betterment of all. 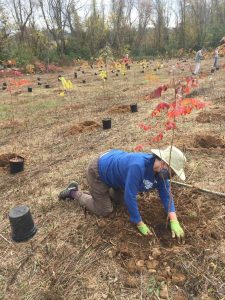 Together with Berks Nature staff, volunteers planted the first 825 shrubs and trees of this habitat restoration project, which will ultimately establish 1,000 native, woody plants in the woodcock management area

Imagine, if you will, a sandpiper. Can you picture it? A plump shorebird on spindle legs with a long probing beak.

Except now, imagine that sandpiper not at the beach, but in a shrubby forest. This sandpiper doesn’t skitter across the dunes and surf, no, it bobs and rocks in deliberate heavy steps through the leafy understory. As such, cryptic, brown-mottled plumage adorns its stocky body, camouflaging it against the leaf litter. Can you still see it?

Good, almost there. Now, imagine the sandpiper’s eyes, large and dark, perched high towards the back of its head. Don’t worry, this peculiar positioning may look strange, but it is perfect for scoping out predators in the sky above while the sandpiper probes for worms in the soil.

One last thing, it’s dark out. Our secretive sandpiper keeps a low-profile during the day.

Perfect. You are now picturing the American woodcock, a member of the sandpiper family living in the forests of Pennsylvania! Known also as the timberdoodle, night partridge, whistling snipe, or bogsucker, the American woodcock has collected a veritable thesaurus of folk names thanks to its odd appearance and behavior.

Awake at dawn or wait until dusk to catch their springtime sky dancing. During the breeding season, males perform for females, emitting an intermittent nasally peent call from the ground before spiraling up into the sky, wings whistling from the rush of air, and chirping melodically during a zig-zag descent.

Unfortunately, we are at risk of losing this upland spectacle. Woodcock populations across the eastern and central United States are in decline. As of 2008, Pennsylvania alone had lost an estimated 40,000 breeding male woodcocks since the early 1970s, a 43% decline.

American woodcock rely on young forest habitats rich in shrubby thickets and saplings. But this early successional forest habitat, as it is known by ecologists, is in short supply. Many of these young forests have either matured naturally into tall-treed woodlands, languished following the invasion of disruptive exotic plants, or have fallen to the insatiable trudge of urbanization.

To return woodcock numbers to those of the early 1970s, and to support this threatened forest habitat, the Management Plan for American Woodcock published in 2008 has set a goal of creating 21.3 million acres of early successional forest habitat by 2022.

Efforts to reach this goal are underway in Berks County!

For decades, the U.S. Army Corps of Engineers has managed rotational woodcock habitat in designated management areas around the Blue Marsh Lake and Reservoir within the Tulpehocken Creek watershed. In a new joint effort that broke ground this year, the U.S. Army Corps of Engineers has been joined by Western Berks Water Authority and Berks Nature to supplement the existing management area by planting a new stand of early successional forest habitat near the Blue Marsh Lake.

Over two days at the end of October, 40 volunteers representing the Berks County Community Foundation’s Youth Advisory Committee, the Tulpehocken Creek Watershed Association, the Mid-Atlantic Renewable Energy Association, and the Penn State Extension Master Watershed Stewards rallied around the American woodcock. Together with Berks Nature staff, volunteers planted the first 825 shrubs and trees of this habitat restoration project, which will ultimately establish 1,000 native, woody plants in the woodcock management area.

The newly planted habitat is populated by a diverse array of species native to Pennsylvania. Following nature’s design, all were selected to reflect the shrubby, successional forests that naturally occur in this region. These include quaking aspen, a woodcock favorite, but also sweet birch, gray and flowering dogwood, winged sumac, blackhaw, and eastern redbud.

Young, low-lying and floodplain forests like this one are a favorite foraging habitat for woodcock: rich, moist soils found near streams tend to support abundant populations of earthworms, the woodcock’s favorite food, and the dense, shrubby forest structure forms a protective shield against the prying eyes of predators.

The greater context of the surrounding landscape is also critical; a mosaic of habitat patches offering places to roost and nest, as well as eat, is required to support American woodcock populations. Nestled in closely with the U.S. Army Corps habitat management area, both resident and migrating woodcock alike should find all-inclusive accommodations at Blue Marsh Lake.

But this young forest will harbor more than the American woodcock. Early successional forests support a diverse cast of wildlife, more than 30 of which find themselves on Pennsylvania’s Wildlife Action Plan; all face uncertain futures as these precious forest habitats decline, and, by the same token, all stand to benefit from the young forest newly planted at Blue Marsh Lake.

When we restore wildlife habitat, we aren’t just planting trees with one species in mind; we are regrowing an entire natural community.

So imagine, if you will, not just the endearing strangeness of our timberdoodle, bobbing and probing the Blue Marsh and Tulpehocken floodplain, but also their neighbors the vulnerable eastern box turtle with its yellow kaleidoscope carapace and the sky-blue indigo bunting. Imagine the summer night serenades of the eastern whip-poor-will and the exuberant song of a breeding golden-winged warbler, dressed boldly in gray and gold. 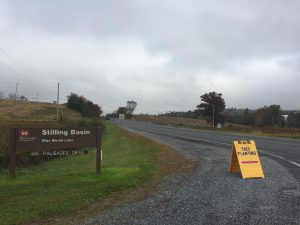 Join us next year at one of our many tree plantings!