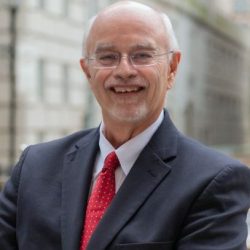 READING, PA, –  Following a nearly 50 year long career of public service, Berks County Industrial Development Authority Executive Director, Thomas C. Mc Keon, AICP, CEcD, has announced his retirement effective December 31, 2020.  Mc Keon who began his career as a VISTA/Americorps volunteer in Philadelphia has served as Executive Director of the Berks IDA for the past 15 years.  Prior to that he served for 15 years as the Director of Community and Economic Development for the County of Berks.

Mc Keon expressed his thanks for the help of past and current BerksIDA’s Boards and County Commissioners, IDA and County staff, numerous elected and appointed officials, and the hundreds of dedicated professionals he has worked with over the years.  He said, “The people I have met throughout my career have been the most rewarding part of the job.”

He has helped with over 250 tax exempt financing projects that provided over $1 Billion in financing and the creation and retention of over 17,000 jobs involving Berks County’s most noted employers.

Says Pam Shupp Menet, the County’s Director of Economic Development “I’ve known Tom most of my career. Not only is he a highly respected member of our profession but he is a thought leader.  His contributions to our field and the development of the County have been outstanding.”

Joe Eways, BerksIDA Board Chairman, said “Tom’s perserverance and ability to overcome obstacles has been much appreciated by the Board.”

Mike Setley, Berks IDA Solicitor said , “Tom is a consumate professional and a very nice guy.  Speaking for our entire deveopment team, he’s been a pleasure to work with.”

McKeon hopes to continue working part-time as freelance consultant but is looking forward to spending more time with family and friends and pursuing his hobbies of golf, fishing, gardening and cooking.

Jeremy Zaborowski, current Deputy Director will be taking over the reins of the organization in 2021.