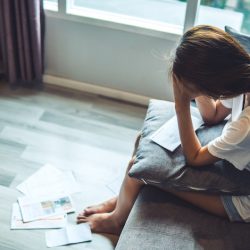 HARRISBURG, Pa. – A new report shows the COVID pandemic is having a big impact on the health and well-being of children and families in Pennsylvania and nationwide. The Annie E. Casey Foundation’s Kids, Families and COVID-19 report draws on data collected since April by the U.S. Census Bureau’s Household Pulse Survey.

Kari King is president and CEO of Pennsylvania Partnerships for Children, which compiled the state data for the report. She said the Commonwealth has done relatively well in maintaining food security, access to health care and housing stability. But she is very concerned that 27% of households in the state reported feelings of depression or hopelessness.

“We know that maternal health and child health is intertwined,” King said. “So if a parent is feeling that way it’s much more likely that a child will be feeling that way.”

The data also show 1 in 10 Pennsylvania families does not currently have health insurance, and 16% fear they won’t be able to pay their rent or mortgage on time.

Almost half-a-million Pennsylvanians have been diagnosed with COVID-19 and more than 12,000 have died. As Leslie Boissiere, vice president of internal affairs with the Annie E. Casey Foundation pointed out, the losses are causing social and emotional challenges for children.

“The numbers are staggering, schools are reporting excessive absences. And I think we can expect an increase in learning loss as a result of this year when their education has been disrupted,” Boissiere said.

The report also found wide racial disparities, with Black and Latino families twice as likely to be experiencing food and housing insecurity and lack of health insurance.

King noted lapses in health insurance combined with the need to socially distance during the pandemic already are having an impact on children’s health care.

“Parents understandably started to keep their children at home and, in some instances, also didn’t take their children to regular pediatric visits, or they were delayed,” King said.

The report recommends instituting policies at all levels of government that promote racial and ethnic equity and prioritize helping children and families cope with the pandemic.