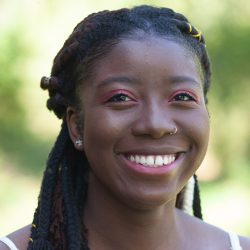 WYOMISSING, Pa. –– Ifeoluwa “Ife” Ogunyinka had been accepted to the University of Johannesburg in South Africa when her family decided to emigrate to the United States. Although she didn’t originally intend to attend Penn State Berks, she found a community at the college. She will graduate with a B.A. in global studies during the college’s commencement ceremony at 2 p.m. on Saturday, Dec. 19.

Born in Nigeria, Ogunyinka and her family moved to South Africa when she was 14 years old because her father was establishing a church. They lived there for a few years before she applied to the University of Johannesburg.

At the same time, due to political unrest, issues with the government and discrimination, her family planned to emigrate to the United States before their visas expired. As the oldest sibling in her family, Ogunyinka felt that it was her responsibility to help her family acclimate to a new country, so she deferred her application, but was still planning to return to South Africa.

She and her family settled in the Roxborough section of Philadelphia in 2017. Ogunyinka found herself in limbo because she had to take her SATs before applying to colleges since the school system in South Africa is different than the system in the United States. She was feeling depressed, so her mother encouraged her to apply to Penn State because the University has a rolling admissions policy.

Ogunyinka explains that she originally wanted to attend University Park and was assigned to Berks, so she visited the campus a few times and she knew that she had found a home.

“I was initially accepted as a nondegree student,” she explains. “I only planned to stay at Berks for one semester, but I found a family and a community here.”

In fact, she changed her intended major to global studies, with a minor in communication arts and sciences, to stay at Penn State Berks for all four years. Incidentally, she is graduating early so she was a student at Berks for only three-and-a half years.

Ogunyinka has thrived during her time at Penn State Berks. She completed a Research Experience for Undergraduates at the University of Iowa, where she was paired with a theatre professor who was conducting research on Caribbean Carnival art. As a result, Ogunyinka completed a case study on Iowa City’s distinction as “the greatest small city for the arts.”

She also completed an internship at the Federal Reserve Bank of Philadelphia in their writing center. Since Ogunyinka was a tutor in the Berks Writing Center, she put her skills and minor in communication arts and sciences to work in the position.

While at Penn State Berks, Ogunyinka also found time to get involved on campus. She lived in the residence halls for her seven semesters at the college. She was a mentor for an honors composition course, and a member of the Honors Club, the World Affairs Club, the Christian Student Fellowship, and Lion Ambassadors.

She was honored with the Campus Life Rising Star award at the end of her first year and the Penn State Educational Partnership Program Service Award this year.

When asked how the college has prepared her for the future, she states, “Penn State Berks has helped me to realize what I enjoy and what I want to do. At the start of my college experience, I was in a very difficult position with my family. The college offered a safe, supportive environment and taught me how to deal with and overcome difficult situations.”

Her ultimate goal is to become a professor and inspire young students as her professors at Penn State Berks inspired her.