The Clearing in the Woods – Neversink Mountain’s Unexpected Sanctuary 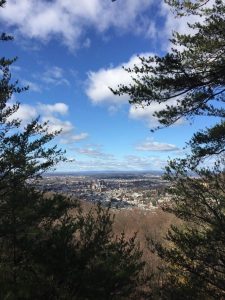 Nestled between the Schuylkill River to the south and the City of Reading to the north lies the natural oasis of Neversink Mountain. Derived from the indigenous Lenni Lenape word, “navasink,” referring to land that comes to a point as a promontory, Neversink’s three distinct peaks stand watch over this ecotone between urban settlement and river valley.

Despite its ecological treasures, Neversink is all too familiar with the painful touch of insensitive human activity.

Following the establishment of the Reading Railroad in 1838, an influx of tourists flocked to Reading and found luxurious accommodations atop Neversink Mountain. A trolley line and 8 miles of railroad tracks were laid across the preserve to ferry pleasure seekers up the scenic mountain slopes.

Remnants of these railways as well as other artifacts of Neversink’s hotel heyday freckle the mountainside to this day.

Then in 1927, the Metropolitan Edison Company (Met-Ed) erected its first electricity transmission line on Neversink Mountain, followed by additional power line installations in the 1950’s and 1970’s. Together, these transmission lines cut up from the southwest corner of the Preserve as one prominent corridor interrupting Neversink’s otherwise wooded ridge.

This corridor of cleared land is managed by Met-Ed under an easement know as a right-of-way. Stretching over 100 feet wide in some places, these right-of-way easements grant Met-Ed access and authority to maintain the operation and security of their facilities and equipment. This includes the removal of trees and other “incompatible vegetation” – any plants that may grow tall enough to interfere with overhead electric facilities or otherwise threaten safe and reliable operation of the electric system.

To adhere to all Federal, State, and Local laws and statutes, electric utilities must keep their right-of-ways free of all incompatible vegetation. However, vegetation management with no objective can impact wildlife habitat.

Shrunken forest patches aren’t suitable for wildlife that require vast and lush acres of interior woodland, especially as invasive colonizers, now emboldened by the increased light and space created through fragmentation, aggressively infiltrate what was once beyond their reach.

When first constructed, just one mile of 100 ft-wide right-of-way installed through a forest can remove approximately 12 acres of trees.

Electric utilities often use herbicides to clear and maintain these right-of-way clearings. When applied accordingly, herbicides can effectively halt the growth of problematic, tall-growing vegetation. But when responsible application instructions are neglected, the surrounding plant community can suffer unintended consequences, resulting in more harm than good.

This is not the case for Neversink Mountain’s right-of-way corridor.

On Neversink Mountain, what began as the loss of precious forest habitat, rich with wildlife, has evolved into a conservation opportunity.

In any given place, the biological community will naturally change overtime as the interactions between resident plants, animals, and microbes inevitably alter the physical and chemical conditions of their environment. As these conditions change, so too do the organisms best suited to live there and thus new denizens come and go.

This ecological succession follows a consistent pattern: disturbed or open areas, high in resources and light, are quickly populated by pioneers like blooming annuals and, later, grasses. Overtime, woody shrubs and young saplings take root and ultimately, scrubby grasslands give way to forests.

But our dynamic system of successions does not stop with forests. Naturally occurring disturbances – flood, fire, wind, and weather – are Mother Nature’s most effective tools for re-initiating succession: felling trees to create sunlit clearings and burning through shrubland to revitalize grassy meadows.

Historically, the eastern region of the U.S. has been a patchwork landscape of forests and grasslands in varying degrees of succession. Fire, both naturally occurring and wielded by indigenous tribes in the past to clear land for agriculture, suspended succession and allowed grasslands to grow.

European settlers followed suit, clearing more forest for croplands and pastures. At the time, agricultural practices were compatible with wildlife habitat needs creating ecologically valuable grasslands, despite the human utility of these areas.

Today, however, grassland is one of the fastest disappearing habitats in the U.S. and across the globe.

As farmland is abandoned, it is either developed for residential or commercial use or, with the successional abatement removed, reverts to forest. Where farmland persists, multi-use agricultural grasslands are threatened by intense farming practices like row cropping, monoculture planting, frequent mowing, and excessive use of herbicides and pesticides.

It may seem like the most unlikely location, but under the high-voltage transmission lines of right-of-way clearings, grasslands and meadows are finding an unexpected refuge. Removal of tall, woody, or otherwise incompatible vegetation meant to protect power lines has had the dual effect of suspending ecological succession, allowing grassland communities to take root.

By supporting these grassland plant communities, utility right-of-ways can provide wildlife habitat, rich in biodiversity, offering new ecological value. Still, to truly achieve these grassland havens, electric utilities must manage the vegetation in their right-of-ways carefully and intentionally, which is exactly what Met-Ed is committed to do.

On Neversink Mountain, herbicides are applied selectively to target undesirable, tall-growing vegetation. This prevents shrubs and saplings from repopulating the grassland while allowing a beneficial community of forbs, shrubs, and grasses to thrive. Given enough time, this plant community can provide a barrier against new tall or woody plant growth, thus reducing the amount of herbicide needed for future maintenance.

Berks Nature is actively monitoring the Neversink Mountain right-of-way to not only assist Met-Ed with the implementation of their conservation-focused management strategy but to track the impacts of these efforts to grow grasslands rich in native plants and wildlife.

By taking these steps and working with Berks Nature, Met-Ed is cultivating an increasingly rare grassland habitat, providing a critical sanctuary for the community of sensitive species that call these transitional spaces home.

At 7.8 billion strong, humans are a ubiquitous force across the planet. There is no landscape, from the deepest ocean trenches to the tallest mountain tops, that humans haven’t impacted. We cannot turn a blind eye to this remarkable influence and the responsibility such power entreats.

We may never entirely remove the risk posed by human occupation, but we can reduce harm. This is a central goal at Berks Nature, one that is epitomized by Neversink Mountain.

After the hotels burned down, after the miles of railroads fell into abandon, after electric transmission lines cut through its mountainous woodlands, humanity could have walked away from Neversink; ashamed and thinking little of our power to do good for nature. Instead, Berks Nature saw an opportunity to not only reduce harm, but to foster a mutually beneficial relationship between humans and nature.

Neversink Mountain is being intentionally managed as a “community forest” – an untraditional nature preserve where management priorities are designed to benefit the local human community while still protecting and nurturing biodiversity.

Former railway tracks have been converted to hiking trails, allowing people to explore and enjoy Neversink’s natural gifts without further fragmenting its wildlife habitats; and Met-Ed’s right-of-way clearing, thanks to the progressive thinking and partnership between Met-Ed and Berks Nature, acts more like a natural forest clearing than a man-made disturbance, providing habitat for several sensitive species that are otherwise struggling to get by in our human-dominated landscape.

Our work, and our role as a community, continues. Overbrowsing by deer is opening the door for disruptive, non-native species to invade Neversink’s forests, and trail abuse, from trash dumping to cutting unapproved “social” trails, threatens the sustainability of passive recreation on Neversink Mountain.

Your community forest needs you. 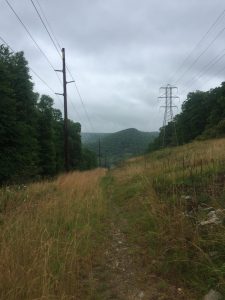 What is State of the Environment?  The State of the Environment evaluates specific data and trends in five environmental categories: Air, Energy, Land, Waste, and Water. Within each category, several specific quantitative indicators are evaluated using available data, trends in the data are assessed, and specific action items that residents can practice to make each specific indicator more “positive” are identified. The five general environmental categories, as well as the specific environmental indicators evaluated, were selected by an interactive process. Berks Nature established subcommittees for each category, with each subcommittee headed by a professional with substantial experience in the specific field. These subcommittees discussed candidate indicators, and narrowed down the list of indicators to be used to 4-5 specific indicators where quantitative data were available.