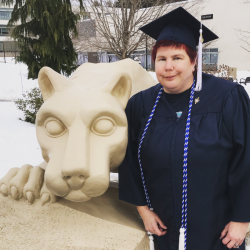 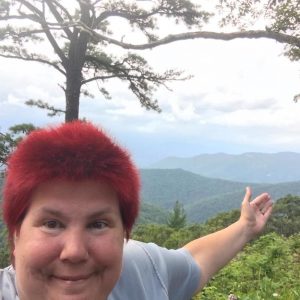 WYOMISSING, Pa. – Tracey Witmyer compares earning a college degree to climbing a mountain; she should know as she has done both. She graduated with a B.A. in communication arts and sciences during the Penn State commencement ceremony at 2 p.m. on Saturday, Dec. 19.

Witmyer’s academic journey began in 2009 when she first made the decision to go to college after being in the workforce for several years. She didn’t consider college an option because in kindergarten, she had been diagnosed with a learning disability that made it difficult for her to speak clearly, read or spell. She conquered those challenges with the help of a speech therapist, but that self-image remained.

She began her studies at Lehigh Carbon Community College and Reading Area Community College. Then in 2014, she enrolled at Penn State Berks, where her husband Mark is a member of the Maintenance and Operations crew.

Witmyer was encouraged by her husband to enroll. She was also inspired by her younger sister and cousin, both of whom graduated from Penn State Schuylkill. She remembers her sister saying that college was hard, and she responded, “Life is hard,” and that earning a college degree was worth it.

Originally planning to major in applied psychology so she could be a better advocate for her brother who suffers from mental health issues, Witmyer soon turned her attention toward the college’s communication arts and sciences degree.

The degree program has opened the door to a world of opportunities for Witmyer. She completed a communication internship with Blue Mountain Eagle Climbing Club, where she was already a member. As part of the internship, she created videos, established a YouTube channel and wrote a blog for the nonprofit organization. Witmyer states, “It was interesting to learn how a nonprofit works.”

An avid hiker, Witmyer is a volunteer with the Appalachian Trail Conservancy. In fact, she has the distinction of hiking the entire 266 miles of the Pennsylvania portion of the Trail. She compares earning a college degree to hiking, saying, “There are hills and valleys and there are some steep climbs, but you learn a lot about yourself.”

An outdoor enthusiast, she also worked as a research tech assistant for Dr. Michael Fidanza at the college’s Center for the Agricultural Sciences and a Sustainable Environment (CASSE). It was during those two years that she assisted John Rost, lab supervisor for biology and horticulture, and others throughout the University and beyond to develop methods to eradicate spotted lantern flies.

“I learned a lot working there and did things that I’ve never done before,” she explains.

Witmyer said that she owes a debt of gratitude to the faculty and staff members who helped and supported her. She credits Michelle Peasley, coordinator of student disability resources, and Paula Plageman, coordinator of the academic advising center, for helping her to navigate the Penn State system and decide which courses to take to reach her goal. She is also very grateful to all the communication arts and sciences professors who encouraged her every step of the way.

“Penn State Berks has prepared me to be a well-rounded student,” states Witmyer. “The communication arts and sciences program taught me how to persuade with rhetoric and how to be a scholar. This is important because most jobs require excellent communication skills.”

After graduation, Witmyer plans to work for a while before applying to graduate schools. Her ultimate goal is to become a professor and inspire others with learning disabilities to pursue their dreams and climb every mountain.