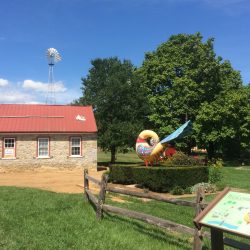 Reading, PA – The Greater Reading Chamber Alliance and the Friends of Epler Schoolhouse are pleased to announce that the $100,000 donation, which was previously earmarked to help pay for the move of the schoolhouse to its new location, will now be redirected to help fund its restoration. George S. Sproesser donated the funds in memory of his wife Vicki, who was a Conrad Weiser schoolteacher

“I knew that there was a huge task lying ahead of the Friends group with restoration and rehabilitation of the building. I said I’d be more than happy to reassign what I had pledged towards that effort instead. It just gets them farther along, which is great,” said Sproesser.

Jane Goetz, a retired schoolteacher and the founder of the Friends of Epler Schoolhouse, said she was thrilled when Sproesser agreed to redirecting the funds after the Greater Berks Development Fund (GBDF) received funding from the Commonwealth Financing Authority to pay for the relocation.

Goetz said some of the monies from Sproesser will now be put towards the stonework and windows in the back of the building, restoring them to their original state. Later this year, Goetz also expects to have the roof replaced.

“We’re hoping to be able to have the schoolhouse open so that when people come, they’ll be able to see what a one-room schoolhouse looked like in 1847,” Goetz said.

Goetz also said that Sproesser’s donation has not only sped up the restoration efforts but has also made all her efforts to save the schoolhouse worth it.

Sproesser said his wife would be pleased since education was so important to her. 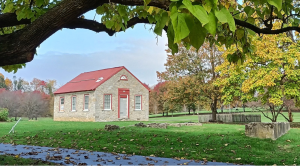 “She was a dedicated elementary school teacher for so many years, and I believe that in her earliest years of school she might have actually attended a one-room schoolhouse. So, there would have been a tie in there as well,” he said.

In exchange for his donation, Sproesser has simply asked for a plaque at the schoolhouse commemorating Vicki.

“I don’t want the spotlight on me. I want it on the school and on her,” he said.

Dan Langdon, Chair of GRCA, said, “I have had the pleasure of knowing and working with George for 30 years. This donation is only one of many that George has made in the community over the years. He and his wife were a great couple. She would have loved what George has done in her name.”

According to Goetz, the group has now raised about $10,000 in addition to the funds from Sproesser, but the effort will require more donations and the lack of in-person events has made fundraising difficult. Those interested in donating can make a check out to the Friends of Epler Schoolhouse and send it to the group’s treasurer Bonnie Schaeffer at 420 Crystal Rock Road, Temple, PA 19560.

GBDF, which owned the building before the title was transferred to the County of Berks, upfronted the cost and arranged for moving the former school 1.5 miles from its location in Bern Township to the Berks Heritage Center, also in Bern.