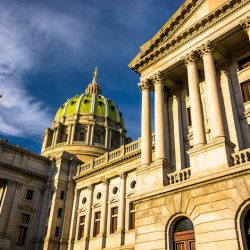 HARRISBURG, Pa. — A question on Pennsylvania’s state ballot in 2019 proposing sweeping changes to the state constitution has been ruled unconstitutional itself by a Commonwealth Court.

The proposed amendment, known as “Marsy’s Law,” has been promoted as strengthening victims’ rights in criminal proceedings. It would implement complex changes to multiple articles in the constitution.

Mary Catherine Roper, deputy legal director for the American Civil Liberties Union of Pennsylvania, said the 3-2 ruling handed down Thursday confirmed the ballot question violated the constitutional requirement that voters must be able to consider changes to different sections of the constitution individually.

“The Legislature sent to the voters a list of 15 new rights for victims that affect at least a dozen different parts of the constitution and, in several key ways, lessen the rights of defendants,” Roper explained.

Secretary of the Commonwealth Kathy Boockvar and intervenors representing the rights of victims in the case have 30 days to appeal the ruling to the Pennsylvania Supreme Court.

Roper noted the complexity of the amendment itself is compounded by the format for ballot questions required by law.

“The proposed change would have added nearly 500 words to the constitution,” Roper observed. “But by law, what appears on the ballot can’t be more than 75 words.”

In her ruling, Judge Ellen Ceisler said a search had found “no other amendment to a section of the Constitution that was as sweeping in scope as the Proposed Amendment.”

Proponents of the amendment contended a single ballot question is appropriate because all the changes strengthen the rights of crime victims.

But Roper argued Marsy’s law does much more than that.

“It does conflict directly with existing parts of the constitution,” Roper asserted. “And especially with the right of defendants to use subpoenas and other process to gather evidence in their own defense.”

The ACLU said the amendment, if adopted, would tip the scales of justice even further against people who are accused of crimes.