Sen. Jake Corman wants to enact new transparency measures to restore trust in the legislature. But skeptics counter that the GOP has for years allowed reform efforts to fail. 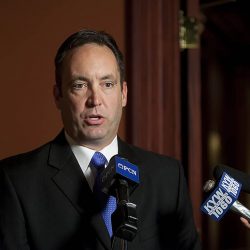 In his first speech as top leader of the Pennsylvania Senate last week, Republican Sen. Jake Corman positioned himself as a reformer seeking to restore faith in government by greatly increasing transparency in the legislature and by elected lawmakers. Image: CHRISTINE BAKER / The Patriot-News
You May Also Like
Facebook Twitter Pinterest Email
Share

HARRISBURG — In his first speech as top leader of the Pennsylvania Senate last week, Republican Sen. Jake Corman positioned himself as a reformer seeking to restore faith in government by greatly increasing transparency in the legislature and by elected lawmakers.

Transparency should be at the center of everything senators do, he said, whether filing office expenses, raising campaign cash, or dealing with lobbyists and dark money groups.

Corman said he would support lobbying reform to “clearly define relationships between legislators, lobbyists, and political consultants.” He also stressed the need for what he called “real-time reporting of campaign contribution expenses,” and suggested stricter disclosures for nonprofit groups that engage in political activity, which currently operate largely in the shadows.

“I looked at what we could do to restore faith in [our] institution,” he said in an interview. “I believe moving forward, that is transparency.”

But an analysis of his track record as a ranking member of the Senate Republican caucus over the past five years reveals more talk than action on government transparency. The majority party has faced criticisms regarding how the legislature spends taxpayer dollars on its own operations, campaign finance disclosures, and questionable ties to dark money groups.

Reform bills, meanwhile, have languished, even though Republicans exclusively control the agenda for which legislation gets heard — and have for Corman’s entire two-decade tenure in the Senate.

“He [Corman] speaks of these major reforms and the need for them and on his own has demonstrated in part why they are a problem,” said Christopher Borick, a political science professor at Muhlenberg College in Allentown. “Some people might call that hypocrisy.”

Last year, for instance, top Senate officials used an obscure clause in the state constitution to redact details about how they spend tens of millions of dollars in taxpayer money every year.

When The Caucus and Spotlight PA requested the information, the Senate first redacted many descriptions of what, and who, the chamber spent money on. Later, Senate officials attempted to scrub those details entirely from expense records, raising alarm among open records advocates.

The Senate Republicans’ top lawyer, Crystal Clark, also directed senators not to answer reporters’ questions about the deletions, even as some questioned why they were necessary.

Senate leaders, including Corman and then-Senate President Pro Tempore Joe Scarnati, did nothing to reverse the practice, even as their counterparts in the House decided to make more information publicly available.

A few senators on both sides of the aisle — including Lindsey Williams (D., Allegheny) and Kristin Phillips-Hill (R., York) — responded to the stories by posting more detailed accountings of their office expenses on their websites.

On campaign finance, House and Senate candidates continue to be allowed to file vague disclosures that make it difficult for the public to determine exactly how they are spending their money. The practice was exposed in a 2019 investigation by The Caucus and Spotlight PA that found, over three years, $3.5 million in spending by candidates that could not be fully traced.

The investigation found Corman’s campaign had spent more than $73,000 from 2016 through 2018 that was listed in public reports as credit card expenses. Receipts obtained by the news organizations showed those payments included about $2,000 each year for liquor — described broadly as holiday gifts — and $200 for a limo during a Pennsylvania Society weekend.

Corman’s campaign said at the time that he complied with the law, but that he supported more transparency and “quicker disclosure of donations.” Still, as then-majority leader, he did not prioritize any bills that proposed an overhaul of campaign finance laws.

In late October 2019, Senate Minority Leader Jay Costa (D., Allegheny) proposed a comprehensive campaign finance reform bill, parts of which were in direct response to The Caucus and Spotlight PA’s investigation. The bill, just as it had happened in previous years, died without any consideration.

Until last week, Corman had also not expressed interest in additional public disclosure requirements for nonprofit groups that organize under federal tax law as 501(c)(4) organizations. Better known as dark money nonprofits, such groups can spend unlimited amounts of money in political races, but don’t have to disclose their donors.

Now, Corman said he believes if such groups name a candidate in paid advertising, they should be subject to the same disclosure as traditional campaign and political action committees, which are required to detail both donors and expenses.

The reversal came after The Caucus and Spotlight PA revealed that Corman helped raise money last March for one such 501(c)(4) group founded by his campaign manager, Ray Zaborney, who doubles as a lobbyist. The little-known group, called Growth and Opportunity Fund Inc., does not reveal its donors and discloses very little about how it spends its cash.

The Growth and Opportunity Fund held a fundraiser at a posh California golf resort last March, where Corman was touted as a special guest. The event was held at the same location and within a day of a separate fundraiser by Corman’s campaign. The campaign and the dark money group denied any coordination, which would be illegal.

But the proximity of the two events raised questions about whether elected officials should be raising money for groups whose donors are cloaked in secrecy. The fundraiser also emphasized Corman’s ties to Zaborney, who together with his wife runs a trio of companies that fundraise for Republican candidates, run their campaigns, and then lobby lawmakers once in office.

Zaborney contends a “firewall” prevents any coordination between those separate functions.

In his speech before Senate colleagues, Corman said he would work with House Speaker Bryan Cutler (R., Lancaster) on a lobbyist reform bill.

The pair “are still very much in the planning stages of what the [lobbyist reform] legislation may look ultimately to accomplish,” a spokesperson for Cutler, Mike Straub, said. But Corman told The Caucus and Spotlight PA that he intends to address the practice of political firms having both lobbying and campaign arms.

Though a number of senators use firms like Zaborney’s that do both types of work, several of his colleagues have expressed concern of late about the practice.

“I don’t know what we can do legislatively,” Corman said, adding that he expects legal challenges to anything that passes. “It’s a fair concern.”

Cutler, who authored the last change to Pennsylvania’s lobbyist rules in 2018, spent a decade trying to pass the reforms before finally succeeding. His bill increased financial penalties for lobbyists who don’t file the required public disclosure reports, and it required the reports to be filed electronically and posted online more quickly.

Lobbying disclosure in Pennsylvania remains frustratingly incomplete, however. As it stands, the public cannot currently see how much lobbyists spend to advocate on a specific issue — let alone which lawmakers they lobby. All the public can see is how much a lobbying firm (which often represents multiple clients at once) spends overall.

Cutler’s bill did not address the practice of lobbyists who also work as political consultants. Former state Sen. Scott Wagner once referred to the practice as “a danger” and a “conflict of interest.” Wagner had talked about introducing legislation to place limits on the practice. It never materialized, and he later hired Zaborney’s company as an ultimately unsuccessful Republican gubernatorial candidate.

Pennsylvania’s campaign finance laws are among the worst in the country and “an absolute embarrassment,” said Borick, of Muhlenberg College, adding that he’s hopeful Corman will move forward on improvements. “It is a worthwhile effort and he deserves credit. It would be a major accomplishment if he were able to do it.”

But he and others are skeptical the legislature will take any meaningful action after decades of ignoring the need for reform, even in the face of multiple, high-profile political scandals.

Democratic Gov. Tom Wolf has for several years proposed a package of good government reforms, including a gift ban, that was never seriously considered by the legislature. But Wolf, in his six years in office, has not made it a public priority when negotiating with GOP lawmakers on top tier policies.

Khalif Ali, executive director of Common Cause Pennsylvania, said it is up to good government groups — and citizens — to remind elected officials of their promises.

“You get accustomed to doing things in a certain way with a low or middle level of accountability,” he said of elected officials. “The higher the accountability, the closer the scrutiny, and that makes people uncomfortable.”

He added: “We have to let our elected officials know that we aren’t interested in more business as usual, but a higher accountability and a government that is more reflective of the people it represents.”