PA State Senator to be Seated After Ballot-Counting Dispute 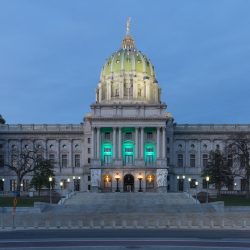 Jim Brewster will be sworn in as a state senator today, ending a dispute over counting ballots in Allegheny County.

The U.S. District Court for Western Pennsylvania ruled on Tuesday that disputed votes in the state’s 45th senatorial district should be counted. Republicans lost challenges in state and federal courts to Democrat Brewster’s narrow victory in November. But on Jan. 5, Senate Republicans blocked Brewster from taking the oath of office, insisting on another federal court ruling. The GOP wanted to toss out 2,300 mail-in ballots that lacked a written date on the outer envelope, but had been received on time.

Marc Stier, director of the Pennsylvania Budget and Policy Center, said the court ruled that the federal claims of Brewster’s opponent, Nicole Ziccarelli, failed on their merits.

“There’s no federal issue that would stop counting those ballots,” Stier said, “which means that Sen. Brewster’s been re-elected and that he should take his seat.”

Ziccarelli had claimed that counting those ballots in Allegheny County violated equal-protection rights, because similar ballots were not counted in neighboring Westmoreland County. However, the state Supreme Court had ruled those ballots could be counted. Stier said he believes Ziccarelli might have had a stronger case had she gone to court to demand that those similar ballots in Westmoreland County also be counted.

“But instead, she went to court to demand that the Allegheny County ballots not be counted,” he said, “and I think most of us would agree that in general, people should have the right to vote and we should follow rules that allow people to vote.”

He said state election law has been interpreted to say unless a technical violation raises questions about the legitimacy of a ballot, the vote should be counted.

About 15 years ago, Republicans joined with Democrats to extend and expand the Voting Rights Act, but Stier pointed out that the access to ballots – and even the voters’ right to choose electors in a presidential election – have become partisan issues.

“There’s a tension in the Republican Party,” he said, “but there’s certainly some Republicans all the time – and a few of them, much of the time – who seem to think that democracy is optional.”

After Brewster is sworn in, Republicans still will hold a majority of seats in the Pennsylvania Senate.