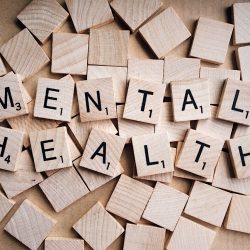 The Household Pulse Survey provides insight into the mental health and well-being of adults living alone during the Coronavirus pandemic. The survey asks two questions related to symptoms of anxiety, and two questions about symptoms of depression.

Phase 3 of the survey collects data over two-week intervals, and this article relies on publicly available data collected from Oct. 28 through Nov. 9, a time period in which the Census Bureau sent invitations to 1,035,752 households and received a total of 58,729 responses.

Among adults living alone, respondents age 65 and over reported lower rates of anxiety and depression than those in other age groups (Figure 1).

Those between ages 18 and 29 and 30 and 44 reported higher rates of anxiety and depression. The age groups were not statistically different from each other on either measure.

Respondents in the 45-64 age group reported symptoms of both anxiety and depression at rates that fell between those of the youngest and oldest respondents. 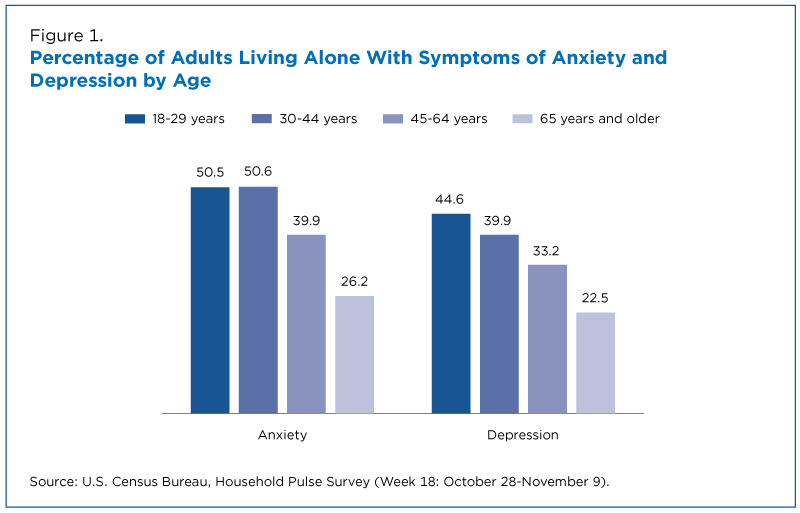 Economic disruptions such as a loss of income had an impact on the mental health of those living alone, as did the expectation of losing employment income in the next four weeks (Figure 2).

About half (51%) of individuals living alone who either lost or expected to lose employment income reported anxiety, compared with only about a third (32%) of those who had not experienced or expected the same type of economic disruption. 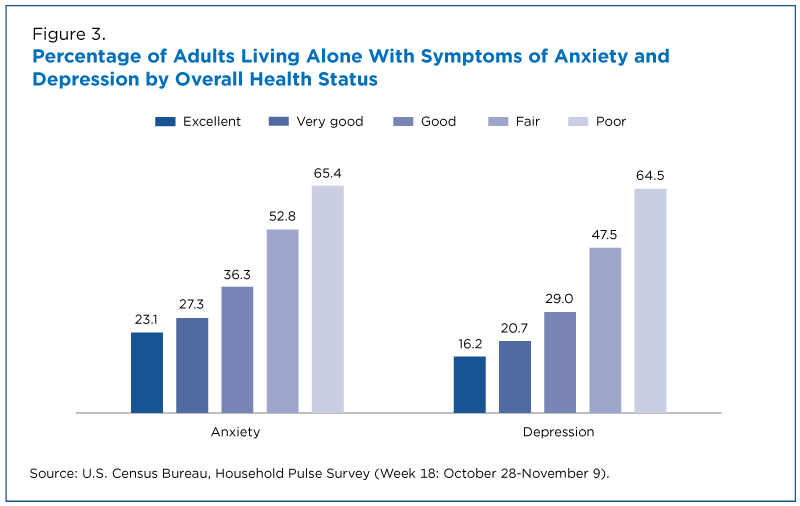 On the other hand, among adults living alone who reported being in poor health, about two thirds reported symptoms of anxiety and depression (around 65% and not statistically different from each other on both measures).

It is important to emphasize that these questions and analysis do not capture causality. In other words, we do not know whether the mental health of those in good overall health was bolstered because of that good health, or whether poor mental health caused people to report lower levels of overall health.

It is likely that both are true: mental health influences overall health and vice versa.

Meanwhile, about 28% of all households reported feeling depressed over the previous week.

We examined differences in mental health by racial and ethnic groups for those living alone but the results were generally inconclusive and are therefore not included here.

These questions are collected in partnership with the National Center for Health Statistics (NCHS). This analysis follows an approach outlined by NCHS, which categorizes individuals based on how frequently they reported feeling anxious or depressed, consistent with diagnoses of generalized anxiety disorder or major depressive disorder.

Thom File is a sociologist in the Census Bureau’s Social, Economic, and Housing Statistics Division.

Matthew Marlay is a sociologist and demographer in the Census Bureau’s Social, Economic, and Housing Statistics Division.