Jennifer Storm, who has held the position since 2013, called her decision to leave at the end of the month “gut-wrenching” and said the Senate’s move was politically motivated. 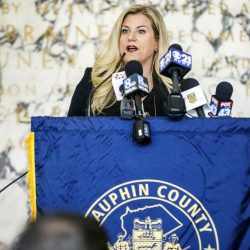 Victim Advocate Jennifer Storm said it would be a mistake to remain in the $133,000-a-year position after the GOP-controlled state Senate late last year blocked her from serving another six years. Dan Gleiter / PennLive
You May Also Like
Facebook Twitter Pinterest Email
Share

HARRISBURG — Pennsylvania’s chief advocate for crime victims announced Friday that she will resign her position, saying it was “untenable” to remain in the high-profile job amid a political feud with legislative Republicans.

Jennifer Storm, the state’s victim advocate since 2013, called her decision to leave at the end of the month “gut-wrenching.” But she said it would be a mistake to remain in the $133,000-a-year position after the GOP-controlled state Senate late last year blocked her from serving another six years.

Storm has said she believes the Senate’s rejection of her is the direct result of a “vendetta” by the chamber’s onetime top Republican, Joe Scarnati of Jefferson County. Storm and Scarnati were on opposite sides of an emotionally charged debate in 2018 over giving victims of long-ago child sexual abuse a chance to sue the perpetrators and institutions that covered up the crimes.

In an interview Friday, Storm said the Senate’s vote in late November to reject her reconfirmation was one of the chamber’s last acts under the leadership of Scarnati, who did not seek another four-year term in the last election. She said he went out of his way that day to reveal that Storm was under investigation by the State Ethics Commission — an investigation she believes he instigated, but will show no wrongdoing.

“What type of human are you when your last act is to defame a victim advocate who literally did nothing wrong? Who did nothing but advocate for victims who you found inconvenient because they bumped up against your own personal interest?” Storm said.

Scarnati did not respond to a phone call seeking comment. Previously, he called Storm’s assertions “egregious,” noting that several Democrats joined Republicans in rejecting her reconfirmation.

Storm previously said she believes Scarnati has held a grudge against her because of her fierce advocacy and outspokenness on behalf of victims of sexual abuse and harassment. That includes a female Senate security staffer who alleged she was harassed by her boss. Senate officials later fired the woman, and Scarnati’s office quietly agreed to pay the legal bills of the man she accused of harassment.

Storm also said Scarnati was angered because of her advocacy for the dozens of victims abused as children by Catholic priests who in 2018 descended on the Capitol advocating for a legislative change which Scarnati vehemently opposed and believed was unconstitutional.

The ethics investigation, Storm has said, involves allegations that she used her position as victim advocate to advance personal and financial interests, including a documentary she filmed about her experience with sexual trauma, addiction, and recovery.

On Friday, she reiterated that she believes she will be cleared.

“If there was a clerical error out there, tell me,” she said. “But I never took a dime from an entity that was inappropriate.”

In a statement, Gov. Tom Wolf, a Democrat who had pushed for Storm’s reappointment last year, said her “empathy, dedication, and ferocious commitment to justice made her an ideal advocate for victims and survivors throughout the commonwealth.”

He said he would be naming a replacement in “the near future.”