Liz Wagenseller will lead an office that plays a critical role for journalists and citizens whose requests for these records are denied, they believe, unfairly. 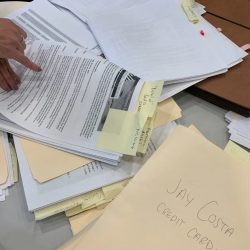 Spotlight PA is an independent, non-partisan newsroom powered by The Philadelphia Inquirer in partnership with PennLive/The Patriot-News, TribLIVE/Pittsburgh Tribune-Review, and WITF Public Media. This story originally appeared in our weekly newsletter, The Investigator.

The agency was created in 2008 after Gov. Ed Rendell and the legislature greatly expanded the public’s access to government records. The office plays a critical role for journalists and citizens whose requests for these records are denied, they believe, unfairly.

Wagenseller will now serve as the chief arbiter of disputes related to state and local agencies, as well act as a conduit between government and the public to explain how the state’s Right-to-Know law works. Spotlight PA spoke with her about the role via email. Our interview was edited for grammar and clarity.

For those who don’t know, how would you describe the role of the Office of Open Records?

The role of the Office of Open Records is to promote citizen access to government information. Individuals can request public records from a local or commonwealth agency, and if denied, they can appeal to our office.

The main activity of the office is to decide these appeals and determine whether the information should be released. The OOR also provides extensive trainings on the Right-to-Know law as well as the Sunshine Act, which governs which meetings and hearings should be open to the public.

Additionally, the OOR responds each year to thousands of inquiries regarding the Sunshine Act and how to use the RTKL request and appeal process from interested citizens, agencies, and third parties. We invite anyone with questions to contact us.

What are your priorities for your first few months in your new role?

My primary goal is to ensure that the office continues to operate seamlessly. Like the former executive director, Erik Arneson, I plan to improve an already outstanding office. I am committed to maintaining the timely issuance of appeal decisions, as well as finding new techniques to effectively and efficiently advance open government in Pennsylvania.

Additionally, within the next few months, I intend to start the process to put OOR regulations into effect. The regulations will simplify the OOR appeal process by addressing the steps an agency must take at the request stage to properly prepare for an appeal. They will also outline the filing of an appeal, the appeal process itself, and the process of seeking judicial review of an OOR decision.

Finally, I plan to strengthen and expand transparency and accountability by coordinating with lawmakers, public officials, and open government advocates to ensure the best application of the RTK law, as well as ensure the OOR is properly funded and able to meets its statutory duties.

Do you think the legislature could improve the state’s Right-to-Know law? If so, what changes would you support or recommend?

The RTK law has improved each level of Pennsylvania government. I never settle for complacency and there is always room for improvement. My predecessors worked closely with the General Assembly on suggested improvements to the RTK law and I look forward to continuing that dialogue. I am especially concerned about commercial entities using the RTK law in a way that strays from its purpose.

I support addressing the use of the RTK law by inmates, an issue that requires balancing proper access with proper use of the process. Sen. John Blake (D., Lackawanna) introduced legislation last session that addressed these issues along with others, and I will support its passage if again introduced.