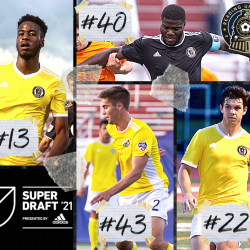 Overall, Reading has had 71 players selected in the MLS SuperDraft, averaging six players per year turning professional through the selection process since 2011. 145 alumni from Reading have now either played professionally, have been drafted by an MLS club, or have capped for their country in international play.

New York Red Bulls selected Archimede with the 13th overall selection, and nabbed Conte with the 40th overall pick in the second round. The pair became the seventh and eighth Reading United players to be selected by the New Jersey-based club via the SuperDraft. The eight players selected from Reading’s ranks tied Red Bulls with Philadelphia Union for the most in club history.

Orlando City plucked Hackenberg late in the first round with the 22nd selection, making it three consecutive drafts that The Lions have selected a player from Reading. Orlando selected another left-footed center back in Kamal Miller in the 2018 draft, while grabbing Joey DeZart in last year’s.

Portland Timbers settled on McCartney with the 46th pick in the second round, continuing their trend of United selections after snatching Aaron Molloy in the 2020 draft. The Timbers had previously picked up Neco Brett in the 2016 SuperDraft from Reading.

Kalil ElMedkhar, who was also eligible for the draft, bypassed the draft by ways of a trade of his homegrown rights to FC Dallas.

Reading United A.C. is the Greater Reading area’s premier minor league soccer team.  Led by the ownership group of Berks Professional Sports, Inc. the club was founded in 1995 as the Reading Rage.  As the club entered its 15th season a name, logo, and color change was made to better feature the ties to the local and state community as well as the soccer goals of the team and its partners.  Now in its 25th season, Reading United’s commitment to professional player development has produced over fifty players currently on the rosters of professional clubs throughout the United States, Europe, and Latin America. Reading United is the official USL League Two affiliate of Major League Soccer’s Philadelphia Union. For more information about Reading