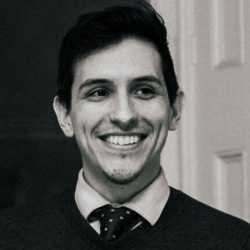 Reading, PA –Reading Area Community College (RACC) is proud to announce Anthony Orozco as the Ninth Berks County Poet Laureate. Mr. Orozco is the first Latino to represent Berks County as its poet laureate for the next two years.

Mr. Orozco is a journalist, poet and performer based in Reading, Pennsylvania. His poetic works have appeared in publications including Holly and the Neighbors, The Nasiona, and Somos En Escrito.  Mr. Orozco is known for performance-driven recitations and place-making community outreach projects. He has performed at high schools and universities in Pennsylvania and New York, led a year-long free monthly poetry workshop series, and was the resident artist who compiled the Pen Street: City of Poems (2020) anthology. He is a fellow for Report For America, and reports on Latino communities for WITF radio and PA Post newspaper. He holds a degree in journalism from the University of Cincinnati. Mr. Orozco stated that being named the Ninth Berks County Poet Laureate was a “dream come true.” ”I am honored to receive such a wonderful distinction, and I share this moment with all of the organizers and artists who empower our community with their passion, light and kindness.”

A panel of local poets and past Berks County poet laureates judged the 41 manuscripts, selecting seven to be judged by two poets of national merit who determined Mr. Orozco as the winner.  The Eighth Poet Laureate is Jayne Relaford Brown, with past Berks County Poet Laureates including Sandra Fees, Nancy Yeager, Maria McDonnell, Craig Czury, and Dr. Heather Thomas.

“We are honored to have RACC keep this important Berks County tradition and are excited for Anthony Orozco, whose body of work arises for his experiences as a poet of Reading and the region,” stated Dr. Susan Looney, president of RACC.

Mr. Orozco will be celebrated through a virtual ceremony on April 8, 2021, as part of a National Poetry month readings.