Kizuka to compete in Snowboarding World Championships in Slovenia 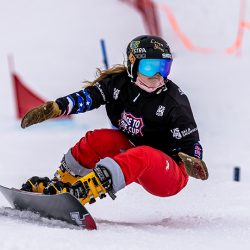 Kaiya Kizuka, Sinking Spring, Pa., a junior mechanical engineering major at Penn State Berks, earned a spot on the U.S. World Championship Snowboard Team and will compete at the 2021 FIS Snowboard World Championships in Rogla, Slovenia on March 1 and 2.

This will be the second time Kizuka has represented the United States at the World Championships in the past three years. She just returned from Steamboat, Colorado where she won gold in Women’s Snowboard Parallel Giant Slalom and silver in the Parallel Slalom.

Kizuka started snowboarding at the age of 5. Her first race experience was through the NASTAR race program. After a year of racing on those courses, which were set for ski racing, she moved on to the USASA Mid-Atlantic Snowboard Series. At the age of 15, she began competing in the open class level at national and international FIS events, where she competed against professional and Olympic snowboarders from around the world.

With the pandemic, this snowboard season has been very challenging for competitors. Kizuka has managed to balance her studies at Penn State, working multiple jobs, injury rehab, training, and a limited competition schedule to stay at the top of her sport. In addition, she has earned a spot on the Dean’s List at Penn State Berks.

With the help of the community and her sponsor, K&D Factory Service in Lancaster, she will be able to pursue her dream of earning a spot on the U.S. Olympic Team in the future.