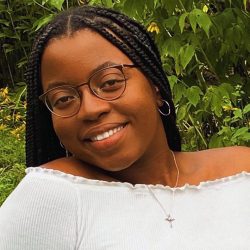 Penn State Berks junior Ja’nique Jules was honored with the 2021 Fannie Lou Hamer and W.E.B. DuBois Service Scholarship award during Penn State’s Martin Luther King Jr. Memorial Celebration on Jan. 15, 2021. Jules has the distinction of being the first student studying at a Commonwealth Campus to receive the award, which honors the memory of civil-rights leaders Hamer and DuBois.

Jules, of Piscataway, New Jersey, demonstrates the characteristics for which Hamer and DuBois were known. She commented that she wants to make a contribution to society. In addition to the Fannie Lou Hamer and W.E.B. DuBois Service Scholarship award, she also received the Penn State Berks Martin Luther King Jr. Service Award.

With a dual major in Writing and Digital Media (Berks) and Political Science (World Campus), as well as a minor in Spanish, Jules’ studies reflect her interest in the world around her. In addition, she was one of the first students to sign up for the college’s newest course: SOC 205N: Critical Race Theory in the Humanities and Social Sciences.

In the summer of 2019, Jules completed an internship at New Jersey Congressman Frank Pallone Jr.’s office and plans to complete another internship for Pallone this summer.

On campus, she is involved in several clubs and organizations. In addition to serving as a Lion Ambassador, she is a member of the Orientation Leaders’ Welcome Weekend committee, a student worker in the Thun Library, and she served as a teaching assistant for the college’s CAS 100 class.

Jules explained that her parents encouraged her and expected her to do her best at any task that she undertook. Both of her parents emphasized the value of education. Her father, who is originally from Haiti, had a unique perspective and appreciation of the educational opportunities open to Jules. She adds that he also instilled the value of a strong work ethic and resilience. Her mother also began preparing Jules for success at an early age, giving her strength assessments when she was in fifth grade to help her to identify and hone her interests and skills.

She explained that she graduated from a small Christian high school where despite being a minority, she was elected president of her senior class. Still she felt discrimination in that environment, so she wanted to attend a larger college or university. She planned to stay at Berks for two years and complete her studies at University Park campus, but she found that she enjoyed the smaller diverse campus atmosphere and the leadership opportunities.

“Being a student at Penn State Berks has introduced me to so many different things, people and ideas,” explained Jules. “I learned to be comfortable with who I am and that will allow me to demand respect in future situations. I also made lifelong friends.”

When asked what she plans to do after graduation, Jules stated that she would like to become a political analyst or commentator. She is also interested in running for public office, in particular for a Congressional seat, as her internship helped her to realize how much Congress accomplishes.

Whatever path she takes, Jules is sure to make the world a better place.