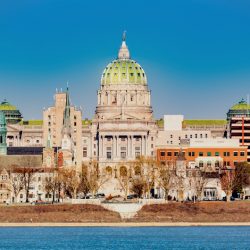 HARRISBURG, Pa. — Judicial-independence organizations are celebrating a temporary victory now that a proposed amendment to the state constitution will not be on the ballot in the May primary.

House Bill 38 would create judicial districts drawn by state legislators and impose a residency requirement for the election of appellate court judges.

Republican lawmakers who introduced the amendment say it would give different regions of the state more representation on the state Supreme Court.

Deborah Gross, President and CEO of Pennsylvanians for Modern Courts, countered it would make judges who currently are selected in statewide elections less independent and more like state legislators who need to be responsive to a local electorate.

“The appellate-court judges determine the law applicable to all Pennsylvania citizens,” Gross emphasized. “They don’t take one geographic area into consideration when they are making their decisions.”

The full House and Senate needed to pass House Bill 38 last week for it to appear on the May ballot but it did not come up for a vote. If passed later this year, it will be on the ballot in November.

Gross argued the measure is a partisan effort to reshape the state Supreme Court to be more favorable to Republicans who hold majorities in both houses of the General Assembly. She noted it had passed the House in 2019 but lay dormant until last July.

“After the Supreme Court had issued some decisions concerning closures with respect to COVID, voting and elections, it was reintroduced quickly because there was a lot of displeasure with the court’s ruling,” Gross explained.

Five of the seven justices currently on the Supreme Court are Democrats.

Republican legislators still want to put the amendment on the November ballot. Gross pointed out that, so far, the bill has been pushed through without hearings, expert testimony or debate, but she is hopeful that may change.

“I did just read that Sen. [Jake] Corman, [R-Bellefonte] recognizes that there needs to be some hearings on this now, maybe the topic of merit appointments should be discussed, that this bill should be reviewed with a little bit of caution,” Gross remarked.

The Judicial Independence Project of Pennsylvania, a nonpartisan coalition of more than 125 organizations, has pledged to continue its efforts in opposition to the bill.