The organizations asked a federal court to unseal records related to the conviction of former state Rep. Leslie Acosta of Philadelphia, arguing there is a high burden for restricting that access. 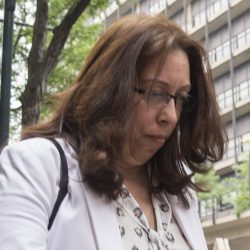 HARRISBURG — Five years after quietly pleading guilty in an embezzlement scheme, much of the case against former state Rep. Leslie Acosta remains under a shroud of secrecy.

More than half of the court records in Acosta’s case are sealed, despite widespread criticism that the onetime Philadelphia Democrat was allowed to remain in office, and even run for reelection uncontested, because of the unusual level of secrecy surrounding her 2016 conviction.

A trio of Pennsylvania media organizations — Spotlight PA, The Philadelphia Inquirer, and LNP|LancasterOnline — are now asking a federal court to unseal those records, highlighting the public’s right to view judicial proceedings and records in criminal cases and arguing that there is a high burden for restricting that access.

“These interests are particularly stark in cases of public corruption,” lawyers for the news organizations argued in their unsealing motion, filed Feb. 16 in U.S. District Court in Philadelphia. “Without transparency in such cases, the public’s faith in the judicial system and government as a whole is jeopardized.”

Acosta did not return calls seeking comment. Her former lawyer, who has since died, said in the past that he sought to shield details of her case because she feared for her safety after agreeing to cooperate in the federal investigation of the embezzlement scheme, which involved other high-profile names in Philadelphia’s political world.

But it is unclear why so much of the case remains sealed, even after the embezzlement investigation has ended.

Federal prosecutors in the United States Attorney’s Office for the Eastern District of Pennsylvania, which handled Acosta’s case, said in court papers last week that they wanted to review the sealed records, but signaled they might be open to potential public release.

From the start, the secrecy surrounding Acosta’s conviction was notable.

Between 2008 and 2012 — several years before she became a legislator in 2015 — prosecutors said Acosta helped her onetime boss embezzle thousands of dollars from a mental health clinic in Philadelphia that served low-income residents. The clinic was founded by Renee Tartaglione — who hails from one of Philadelphia’s well-known political families — and Tartaglione’s husband, Carlos Matos, another political fixture in the city.

According to court filings, Acosta received thousands of dollars in checks from the clinic for work she did not perform, then cashed them and gave the money to Tartaglione.

The public only learned about her case after The Philadelphia Inquirer revealed in September 2016 that the North Philadelphia Democrat had quietly pleaded guilty earlier that year and had agreed to testify against Tartaglione, who was convicted in 2017.

Court filings involving her guilty plea, as well as sentencing documents, were under seal.

Prosecutors never announced her conviction, and Acosta did not tell her constituents or her colleagues in the state House of Representatives.

By the time the public learned about her case, it was too late for a challenger to get on the ballot to oppose her reelection. Acosta ran uncontested, winning a second term in November 2016. But she received a cold reception from her colleagues, who pressured her to step down, which she did in January 2017.

Paula Knudsen Burke, a Pennsylvania-based lawyer for the Reporters Committee for Freedom of the Press as part of its Local Legal Initiative, said there is a high burden for sealing judicial proceedings and records, and those seeking to do so must show that such secrecy outweighs the public’s First Amendment and common law rights of access.

“Because most of the proceedings and documents in this case were sealed, Acosta was able to keep her involvement in a criminal scheme to defraud a mental health clinic in one of Philadelphia’s poorest neighborhoods hidden from her constituents until her reelection was all but guaranteed,” wrote Burke, who is representing the media organizations and working with the Cornell Law School First Amendment Clinic.

The media organizations are asking that 23 of the total 40 docket entries in Acosta’s case be unsealed, or at the very least, released with redactions.

If the release is denied, the lawyers are requesting that the court make public its reasoning, noting “access educates the public about the judicial system, encourages the perception that court proceedings are conducted fairly, and allows for observation and evaluation of prosecutorial performance.”