United’s 25th Season kicks off May 15th on the road; home opener on May 21st 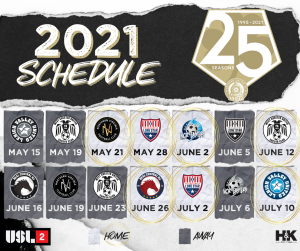 Season tickets that give entry to all seven home dates will be available for only $20 at readingunitedac.com on March 1.  All fans who purchased season tickets for the cancelled 2020 campaign will have their tickets roll over to the 2021 season.

Reading looks to capture its fourth divisional crown in five seasons, and potentially become the second team in league history to reach three consecutive finals. United claimed their second straight Eastern Conference title in 2019, finishing with a 10-1-3 record and advancing to the USL League Two Final for the second year in a row. Two United players (Felipe Hideki and Lamine Conte) were named to the All-League team, with Conte selected as the league’s Defensive Player of the Year.

Head coach Casey Moore takes the helm for his first season. Moore became the team’s sixth head coach since 2005 on February 1st, taking control of the club that will have a decidedly more local flavor in 2021.

Tryouts are still ongoing for the 2021 USL League Two team, as well as the reserves and U20 squads. The next tryout date is currently scheduled for Saturday, February 25th from 1-3pm at Exeter’s Don Thomas Stadium. Online registration is available at readingunitedac.com/tryouts.