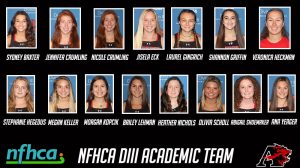 The organization’s DIII national academic squad program recognizes those student-athletes who have achieved a cumulative GPA of 3.30 or higher throughout the first semester of the 2020-21 academic year.

Check out the full team here