by David A McConnell 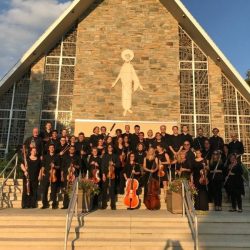 Berks Sinfonietta continues its on-line concert series this Saturday, March 27 at 7;30 pm. The concert can be viewed on Facebook and YouTube or www.berkssinfonietta.org.

The concert opens with the first of Handel’s “Concerto Grosso No. 1” in G Major. Handel composed his entire set of 12 Concerti (opus 6) in the space of a single month in the autumn of 1739; each concerto displays a forceful, dramatic personality, with striking melodies, unexpected harmony and dynamic changes, and playful banter between the soloists and the more powerful ensemble. The short opening movement, solemn and majestic, quickly moves into a lively allegro. The following Adagio features a beguiling duet between the violins, followed by a fugue and toe-tapping gigue, the soloists echoing the full orchestra.

During the first months of the pandemic, players from the orchestra got together with our Artistic Director to make informal videos, which were shared on the ensemble’s Facebook page. This concert will include one of those videos, featuring bassoonist Garrett Brown accompanied by David McConnell. Garrett plays “Three Pieces” by the 20th-century French composer Charles Koechlin. A pupil of Massenet and Fauré, a substantial portion of his oeuvre includes music written for wind instruments. The three pieces are sensuously evocative, moving from a mood of quiet meditation to greater animation and ecstasy.

Composer Elfrida Andrée was born in Visby, Sweden and had her first music lessons with father. She attended the Royal Academy of Music in Stockholm where she studied both organ and composition, and later studied in Copenhagen. After working as an organist in Stockholm from 1861 to 1867, she became music director and organist in Gšteborg, where she remained for the rest of her career. Elected to the Swedish Academy of Music in 1879, she composed over 100 works, including Two Romances for violin and piano, Sonata for Violin and Piano in B-flat, and the String Quartet in D Minor.”

Jonathan Spatola-Knoll, a noted scholar and conductor, transcribed this quartet for string orchestra, naming it “Serenade for String Orchestra.” In 1909 Andrée added a string bass part without changing the original string quartet parts, suggesting she intended that the work be performed by a string quartet, quintet, or string orchestra. Berks Sinfonietta’s performance will be the premiere of Spatola-Knoll’s transcription, which successfully highlights Andrée’s romantically songful and richly harmonized writing.

Viewing is free and available to all. Berks Sinfonietta request donations equaling normal ticket costs ($15/Adult and $5/Child). Tune in for an evening of joyous and beautiful music, Saturday, March 27 at 7:30 pm. Streamed live on Facebook and YouTube – to learn more visit www.berkssinfonietta.org.