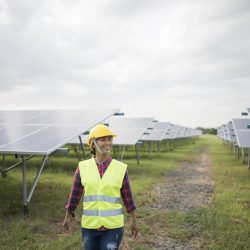 Gov. Tom Wolf announced Monday the biggest solar-energy commitment ever undertaken by any government in the United States.

Known as Pennsylvania PULSE, the power-purchase agreement will result in construction of seven large solar arrays in six counties; enough to produce nearly half of the electricity used by state government.

Robert Routh, public policy and regulatory counsel for the Clean Air Council, said the solar arrays will generate a total of 191 megawatts of electric power, and are scheduled to go into operation on Jan. 1, 2023.

“Cutting pollution, creating hundreds of jobs, bringing millions of dollars in investments to local communities,” Routh outlined. “It’s great news all around, and it’s important to build on this progress.”

The project is part of the governor’s “GreenGov” initiative to help meet clean-energy and energy-efficiency goals established by executive order two years ago.

The order calls for a 26% reduction from 2005 levels of greenhouse-gas emissions statewide by 2025, and an 80% reduction by 2050, but Routh pointed out the PULSE project will reduce emissions by only a small fraction of that amount.

“There are still many other tools that we need to make use of, and many other policy steps we need to achieve those goals,” Routh explained.

The solar arrays will eliminate almost 158,000 metric tons of greenhouse-gas emissions each year, but total annual statewide emissions are about 233 million metric tons.

Pennsylvania is pursuing other ways of reducing carbon emissions.

Routh said one of the most significant will be finalizing the regulations required for the state to become part of the Regional Greenhouse Gas Initiative (RGGI).

“Once those regulations are in place, it is projected to reduce 188 million tons of carbon from power plants in Pennsylvania by the end of the decade,” Routh confirmed.

Eleven other Northeastern states are currently members of RGGI. Pennsylvania is expected to become a member early next year.