The state has made significant progress in its vaccination effort after Gov. Tom Wolf came under intense scrutiny, but that progress still depends, in part, on where you live. 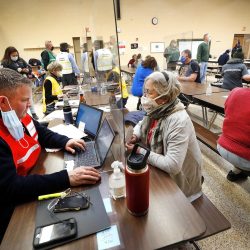 While high-level statistics show the state is making progress, county-level data shows that some Pennsylvanians are apparently faring better based on where they live. In Sullivan County, where local and state officials ran a vaccine clinic in late January, 37% of residents have received at least one shot. Fred Adams / Spotlight PA
You May Also Like
Facebook Twitter Pinterest Email
Share

HARRISBURG — For Doris Daigle of Westmoreland County, booking a coronavirus vaccine appointment was a multi-state effort shared by her nine children and 27 grandchildren, spread out across the country from Los Angeles to New York City, Houston to New Jersey.

They helped Daigle, 86, of Greensburg, scour vaccine appointment sites — from major health-care systems like UPMC and Excela, to chain and small independent pharmacies — as she herself surveyed friends on social media or people she bumped into while running errands.

“Where does someone in her 80s go to get a COVID shot?” she asked.

Daigle lucked into a vaccine appointment March 18, when a local Giant Eagle called to offer her a last-minute appointment slot that opened up. But she wondered, “What about those dear hearts who don’t have anybody to help them?”

That’s the question on the minds of many Pennsylvanians as the state lurches forward in an effort to move on from Phase 1A of the vaccination plan, which prioritizes health-care workers, people older than 64, and anyone older than 16 with certain high-risk health conditions.

Gov. Tom Wolf has embraced President Joe Biden’s May 1 goal to open vaccine eligibility to all Pennsylvania adults. In order to advance beyond Phase 1A, his administration has directed the state’s vaccine providers to clear their waitlists and schedule appointments for anyone who currently qualifies by March 31 (though those appointments can extend far beyond that date).

With that deadline looming, Wolf is confident the state is on track to meet it.

“We’re not perfect,” Wolf said last week during a press briefing at a vaccine site in Scranton. “We’re still not at the place where every senior — everybody who needs a vaccine, which is all of us — has gotten that. Until we get to that point, I think we need to keep working as hard as we are to figure out the best way to do this.”

But some residents, local officials, state lawmakers, vaccine providers, and volunteers are skeptical — and wary of promising too much.

“We have to work with the state,” Dunn said. “My problem with the state Department of Health has been the mandates that they throw down. When you have a rag-tag team of volunteers who you’re telling, ‘You have to make 13,000 calls by the end of the month,’ it’s just not realistic.”

As of Friday, 3.18 million people had received at least one dose of a coronavirus vaccine in Pennsylvania, state data shows. The health department estimates that there are about 4 million eligible people in Phase 1A, and officials expect about 80% to seek the vaccine.

“If about 80% of eligible individuals choose to be vaccinated, that means more than 3.2 million Pennsylvanians must have either received a vaccine or have been scheduled by the end of the month, for an appointment in the future,” according to a health department statement.

While high-level statistics show the state is making progress, county-level data shows that some Pennsylvanians are apparently faring better based on where they live.

Across the 66 counties in the health department’s vaccine jurisdiction, an average of 23% of residents in each had received at least one shot as of March 24, according to state data.

Some rural counties, like Fulton and Potter, had some of the lowest vaccination rates in the state, with 12% and 13% of their populations, respectively, having received at least one shot.

In many parts of the state, the demand for appointments is down by about 50%, said Rep. Tim O’Neal (R., Washington), a member of the state’s COVID-19 Vaccine Joint Task Force.

Demand is higher in the southeast, he said. But even there, only about 70% of appointments for the next week are filled, he said.

“We’re getting to the point where the people who are sitting on the waitlist have found an opportunity somewhere else,” O’Neal said. 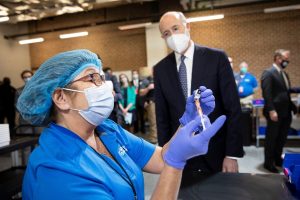 Gov. Tom Wolf observes a worker at a mass vaccination site in Lancaster County. As of March 20, there were about 97,000 people on its waitlist. Commonwealth Media Services

Of the people currently eligible for a vaccine, perhaps no group has struggled to secure doses as much as older Pennsylvanians, who are among the most vulnerable to serious complications and death from COVID-19. Most of the state’s more than 24,000 coronavirus deaths were among people older than 64.

About 70% of Pennsylvania residents in that age group had received at least one shot as of Friday, ranking Pennsylvania behind neighboring states like Delaware and Maryland, but ahead of New York, New Jersey, and West Virginia, according to data from the Centers for Disease Control and Prevention.

That total includes a federal program that vaccinated people in nursing and some personal care homes, but does not include numbers from Philadelphia — which is running its own vaccine program — or federal facilities.

Facing criticism that it was too hard for some older people without internet access or computer skills to sign up for vaccine appointments, the Wolf administration in February touted resources available through Area Agencies on Aging — 52 outposts of the state Department of Aging that provide resources throughout Pennsylvania.

These agencies do not provide vaccines, but they can facilitate the sign-up process by reaching out to seniors who are enrolled in other health or prescription programs, and by coordinating waitlists to distribute to vaccine providers.

Many have been working for weeks to clear their backlogs.

In Cambria County, where about 28% of the population has received at least one shot, 47 names were on the local AAA’s waitlist as of March 16, said Veil Griffith, the agency’s administrator.

She and other agency heads in the western part of the state had noticed that demand is starting to slow.

“People are starting to receive the vaccine, and we’re seeing people come back to the senior centers,” said Leslie Grenfell, executive director of the Southwestern Pennsylvania Area Agency on Aging, which represents Fayette, Greene and Washington Counties.

Her agency had no waitlist on March 16, Grenfell said.

But on the same day across the state in Dauphin County, the local AAA had more than 200 names on its waitlist. And as of March 17, the Luzerne-Wyoming County AAA had thousands and counting, said Mary Roselle, the agency’s executive director.

Vaccine appointments in the northeast region are scarce, and often filled up within an hour of being announced, she said. It doesn’t seem like much progress is being made toward getting people signed up in her area.

“As long as we’re receiving these phone calls, we know that they’re not,” Roselle said.

As Spotlight PA questioned the state about these long waitlists, the health department on Thursday ordered vaccine providers to work with AAAs and Medicaid programs to schedule remaining people eligible in Phase 1A for vaccines for as far into the future as necessary.

The Department of Health has helped to support some community vaccination clinics, but for the most part has left vaccine distribution in the hands of health systems, pharmacies, and local health agencies.

In another effort to speed up vaccinations, the state health department on March 18 released a plan to temporarily scale back the number of vaccine providers and send a higher volume of doses to sites that are able to administer them quickly.

But some believe taking doses away from small, independent pharmacies could hurt the communities the move was intended to serve.

“They were still getting the job done with their older population,” Sen. Elder Vogel (R., Beaver) said. “And people who didn’t have access to good transportation, they need a vaccine just as much as anybody else.”

Adzema Pharmacy in McCandless, which serves Pittsburgh’s northern suburbs, was among those removed from the provider list.

The pharmacy has administered 400 first doses and 200 second doses so far, and plans to administer the remaining second round doses before temporarily being removed.

In Perry County, where about 22% of residents had received at least one shot as of March 24, many residents don’t want to drive out of the county or to a mass vaccination site to get a vaccine, said Rep. Perry Stambaugh (R., Perry).

Finding people to staff vaccine clinics has also been a challenge, he said.

Spartan Pharmacy, an independent pharmacy that operates three locations in Pittsburgh’s southern suburbs, was not removed from the list of vaccine providers last week.

When it has the supply, Spartan is able to vaccinate more than 1,800 people during its day-long clinics, owner Adam Rice said.

The state is asking providers to schedule remaining 1A appointments based on previous allocations of vaccine doses as far into the future as necessary. But the supply is inconsistent, and Rice only finds out how many vaccines he’ll be receiving for the following week days before they’re due to arrive. That makes it hard to plan clinics and coordinate sign-ups, he said.

“A waitlist insinuates there’s a place in line,” Rice said. “Folks sign up to be notified by email when we have appointments available. That list is 42,000 people.”

Even larger operations are struggling to figure out how to handle their waitlists.

The Lancaster County community vaccination site is currently vaccinating about 2,000 people per day. As of March 20, there were about 97,000 people on its waitlist, Commissioner Josh Parsons said, adding that the number is likely to grow.

“We could say we’re scheduling all 100,000 people, but unless you know you have vaccines, you can’t give them the appointments,” Parsons said. “Or you do, but you have to change it.”