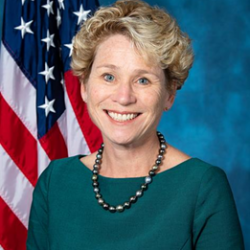 On March 29, Kutztown University Small Business Development Center (SBDC) hosted a virtual Town Hall for business owners. The Town Hall also honored Congresswoman Chrissy Houlahan for her advocacy for small business owners. Congresswoman Houlahan is in her second-year congressional representative heading to Washington to advocate for Pennsylvania’s people and communities. She was elected to the newly created 6th district in January 2019.

“The KUSBDC was honored and excited to take part in Congresswoman Houlahan’s Town Hall meeting. Chrissy has been a champion for small business not only within her district but all of Pennsylvania,” said John Stetler, KUSBDC Director.

“Congresswoman Houlahan has been an advocate in addition to exploring more opportunities to help women entrepreneurs thrive in 2021. This includes how women-owned small businesses are navigating the pandemic, removing market and supply chain barriers, and more options for capital access,” said Sonya Smith, Associate State Director of Programs and Policy.

Congresswoman Houlahan has helped lead several thriving Southeastern Pennsylvania companies, including AND1, a basketball apparel company headquartered in Paoli, and B Lab, the organization that launched the B Corporation movement. She served in Teach for America as a chemistry teacher at Simon Gratz High School in North Philadelphia. She then led and scaled a non-profit, helping thousands of underserved students across America build their literacy skills.