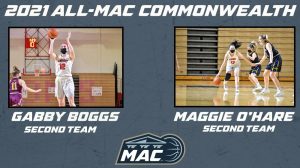 This marks the second-straight year that Boggs has earned MAC Commonwealth All-Conference second-team honors.  The Northfield, N.J. native started all 11 games and averaged a double-double on the season averaging 12 points and 10.8 rebounds, tallying four double-doubles on the season. Boggs led the Lions in rebounding with 119 and grabbed a career high 20 rebound against Alvernia on March 11th. She scored 132 points on the season averaging 40.6% from the field. Boggs also added 30 assists, 24 blocks, and 17 steals. Boggs ranked third in the MAC Commonwealth in rebounding (119), ninth in scoring (132), ninth in field goal percentage (40.6%), seventh in assists (30), and fourth in blocks (24).

O’Hare earns second-team recognition to receive her first MAC Commonwealth All-Conference honors. The West Chester, Pa. native lead the Lions in scoring with 175 points on the season and averaging 15.9 points per game. She led the MAC Commonwealth in three pointers with 26 on the season shooting 44.1% from beyond the arc. O’Hare also led the Lions in free throw percentage shooting 75% from the charity stripe on the season.  She registered a career high 30 points against Delaware Valley on Feb. 25th shooting 8-of-12 (66.7%) from the field and 5-of-8 (62.5%) from beyond the arc and tallied a double-double against Eastern on Feb. 12th with 15 points and 12 rebounds. O’Hare ranked second in the MAC Commonwealth in scoring (175), seventh in field goal percentage (43.4%), and eighth in free throw percentage (75%).

The Albright women’s basketball team finished third in the shortened MAC Commonwealth 2021 season with a 4-4 record in conference play, and 7-4 overall.