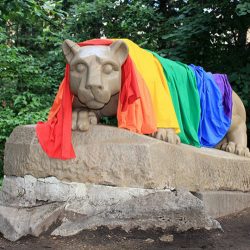 Penn State Berks will celebrate Pride Month this April with the following events. All events will be virtual and are free and open to the public unless noted otherwise.

Apr. 5–9 — Love Out Loud with Pride video
To kick off Pride Month, the Penn State Berks Diversity, Equity and Inclusion Committee will air a video titled Love Out Loud with Pride the week of April 5–9. The video will be comprised of submitted clips from the campus community that represent how they show their pride. The video will be available for viewing on the Penn State Berks YouTube channel and other social media platforms. For additional information, contact Ivy Wang, coordinator of residence life, at 610-396-6294 or via email at [email protected].

Apr. 15, at 7 p.m. — Dominique Jackson, actress on FX television series Pose
Zoom Link
Actress, model, author, advocate and activist, Dominique Jackson is best known for her leading role as Elektra Abundance on the FX television series Pose. From fleeing persecution as a transgender woman in her home country of Trinidad and Tobago, to starring in a hit television show, Jackson has seen it all. After experiencing homelessness and rejection from her own family, she has used her success to shed light on the challenges transgender women too often face. Pose is an FX television series about the African American and Latinx LGBTQ+ gender-nonconforming ballroom culture scene in the 1980s and 1990s. For Jackson, her character is a representation of what she and many transgender women experience when they lose their families after coming out. This presentation is part of the college’s Arts and Lecture Series. For additional information, contact Angie DiJiacomo, assistant director of student affairs of campus life, at 610-396-6076 or via email at [email protected].

Apr. 23, at 6 p.m. — Lavender Graduation
Lavender Graduation is an inspiring and affirming ceremony that celebrates the achievements of students in the LGBTQ+ community from all Penn State campuses. The ceremony recognizes students who received scholarships and campus awards, and students have an opportunity to thank supporters. Graduates receive a rainbow tassel, stole, and graduation certificate. Students from any Penn State campus who have graduated the winter prior to the ceremony, or who will be graduating the spring, summer, or winter after the ceremony (December 2020 - December 2021) are invited to attend. All guests must register in advance. To learn more on how to attend Penn State’s LGBTQ+ Signature and Annual Programs, visit their website.