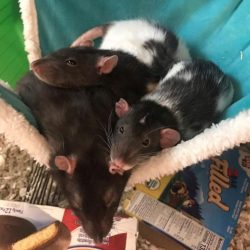 So many people seem confused or disgusted when I tell them I have pet rats.

“You have what living in your house?!”

“They’ll give you the plague!”

I’ve heard it all.

Pet rats have been domesticated since the 18th century, so it is a wonder to me that many people still don’t realize they’re a common pet, let alone a GOOD pet. Walk into any pet store that sells small animals and you’re sure to find them amongst the guinea pigs and hamsters. They come in dozens of different colors, patterns, fur types, and varieties. Celebrities such as Michael Jackson, Jamie Lee Curtis, Clint Eastwood, and even Theodore Roosevelt have/had pet rats.

So why do rats have such a bad reputation? I think the reason many people see having rats as “icky” is due to their portrayal in media. In many movies where rats appear, they are the villains. Cartoon rats are angular and toothy, with snarling, vicious smiles, while mice are small, round, wide-eyed, and cute. Toy rats, popular around Halloween, are usually pitch black with grimy fur and red eyes. And then of course, there’s Western Society’s hatred of the wild Norway Rat, who’s lived alongside humans for centuries, following us wherever we (and our trash) go.

The people that recoil in horror when I tell them I have pet rats usually change their tune after they actually meet my rats. It’s hard to see something as a cartoonish, red-eyed monster when it’s intently licking your hand or gently taking treats from between your fingers. And as more people open their eyes and their hearts to the true nature of these intelligent little animals, more are adopting them as pets.

So, here are five reasons why rats make the best pets!

Many apartments don’t allow for large pets like dogs or cats, but will make an exception for small caged pets like hamsters and guinea pigs. So, as long as you’re not letting your rats run around unsupervised to chew on the siding, landlords will often overlook them. While a dog, cat, or rabbit will use the whole house as their territory, rats will only take up as much room as their cage does. They’re also quiet (unless you get a particularly squeaky wheel) and won’t leave the apartment covered in fur, so any musophobic guests may not even realize they’re there! And, unlike a dog, you don’t need to expend too much energy to take them out for walks or play with them. A rat will simply be happy riding around on your shoulder or sitting with you while you watch TV.

Rats are incredibly social animals. In the wild, rats live in large family groups, all caring for each other and working together, and as pets they are no different. They play together, store their food in a communal storage area, take care of their sick and elderly, and love to sleep in one big “rat pile.” Unlike the more solitary hamsters, rats are designed to be social.

Rats need to live with other rats, as a human can not provide the same type of companionship a fellow rat can, but they will still bond with their humans just as readily. I often marvel at how my rats seem to understand just how big I am compared to them, yet still treat me as if I’m just a giant rat. They will groom my hands with gentle licks and nibbles, pounce on my feet, and they are very good at communicating what they want. If my rats want to be picked up they will reach up to me, if they want me to come closer they’ll tug on my sleeves, if they want me to play they’ll pounce on and nibble at my hands, if they want to be left alone they’ll push my hand away, and if they’re very displeased with a situation they will squeak!

They also know how to be gentle. Rats have very strong sharp teeth and, just like a dog or cat, can really do some damage if they want to! But their teeth are also extremely sensitive, and they use them to explore just as much as we use our hands. When a rat uses its teeth on something, it is immediately calculating what it’s biting into and how much pressure to use to avoid damaging it. I am consistently amazed at how my rats can so gently take a sesame seed out from between my fingers with their teeth, all while barely touching my skin.

Friendliness, communication, and gentleness are all great skills to have for an animal that lives in a big family in a tight space, and that’s why rats are so good at it!

Behavior experiments on lab rats have proven time and time again that rats are highly intelligent animals. While not only socially intelligent, they are also great problem solvers  and thinkers. Studies have found rats to show empathy and regret, dream, reciprocate favors, strategize, and adapt quickly to new environments. In fact, the reason they’re so often used in experiments is they’re so neurologically, physiologically, and psychologically similar to humans!

As rats are highly food-motivated and love to learn new things, teaching them tricks is a great way to bond with your rats. Rats will usually quickly learn to come when called (mine certainly know to come when I open a bag of snack mix) but some people have trained their rats to fetch, jump through hoops, drive little scooters, pull drawstrings, and run obstacle courses! I rarely have the time to attempt all that anymore, but I do like to make sure my rats at least know “spin”, “up”, and “walk” (on their hind legs.) They love showing off these tricks for treats. Sometimes if my rats see me pull out a bag of treats they’ll come running and start doing every trick they know!

A side effect of being both sociable and smart is that rats love to play! Unlike a hamster, guinea pig, or even a mouse, rats love to engage in play simply for the joy of it. They will chase and tussle with each other, toys, and their humans. Studies have even found that rats will “laugh” when engaging in play (though this sound is too high-pitched for human ears.)

Rats are all individuals though, some may prefer to chase a feather on a string while others want to play “tag”, and some may just prefer to cuddle rather than be rowdy. Rats are also usually most playful as babies, winding down with age. Even so, if you want the “play factor” of a dog or cat compacted into a tiny little pocket pet, then rats are the pets for you.

Pet rats are domesticated. That means they’re a lot tamer and more comfortable around humans than their wild counterparts, such as the difference between a mangy coyote and a pampered pooch. Your average pet rat won’t be scampering around in the sewers and digging through the trash for scraps.

Rats actually are very clean animals. They spend a lot of time grooming themselves and each other (and their humans, too!) They like to be in a clean environment and you may even find rats creating a designated “trash area” and “poop area” in their cage, and they can be litter-trained. In fact, they consider humans to be pretty dirty themselves, and usually spend a lot of time cleaning themselves after having been handled (which I try not to be offended by.) As long as you keep their cage clean, they’ll be just as clean as a dog or cat, perhaps even more so since they won’t be outside playing in the dirt!

So by this point you may be asking, “If rats are so great, why don’t more people have them? They’re still not as common a pet as a dog or cat!” Well, aside from the previously mentioned societal bias against them, they’re also not for everyone. For all their pros, there are also cons that may not make a rat the perfect pet for you.

Because rats are so intelligent and playful, they need a lot of space. Since it’s not very doable to let a rat safely free-roam around your house, they need a large cage, with multiple levels. A general rule of thumb is that each rat should have about two square feet of flat space to themselves. Depending on how many rats you have, that need for space can quickly add up! I have 4 rats right now; their cage has four levels and is taller than I am! I was lucky to find this cage for cheap, but if you want to have rats, the size and price of an adequate cage may be beyond your budget.

Since we’re on the topic of expenses, rats may seem like inexpensive pets at first, but you may find them costing much more than you bargained for when it comes to vet bills! Since rats are not cats or dogs, they are considered “exotics” and you need to find a vet trained in small mammal medicine. The cost of this specialized vet care can sometimes be more than even dog or cat vet bills. And rats will need a vet at least once in their lives as they are prone to respiratory issues and tumors, especially as they get older.

I find owning rats to be worth these expenses. I use CareCredit for their vet bills and budget for their needs. I buy Oxbow pellets in bulk so I save on food, use fleece as bedding so I save on bedding, and make toys for my rats (who tend to be more happy with a cardboard box than an expensive toy anyway… but isn’t that just the way with any pet?)

But the hardest part about having rats as pets is their lifespan. The average lifespan for a domestic rat is two and a half years. They start to slow down at around one and a half, and really show their age at two. I’ve heard of some rats living to be five or even nine, but I’ve had over forty rats in the last twelve years, and my longest-lived ones barely made it past three. For some, this can be too heartbreaking. To develop a bond with a highly intelligent, social animal only to have it pass away in a short time could be your deal-breaker when it comes to owning rats. I have met a few people who said they used to have rats but after they lost them they couldn’t go through it again.

And it is hard. Every time. But I believe that the love and joy that rats can give in that amount of time more than makes up for the heartbreak at the end. It also means that you’ll be more prepared for the next rat in need of a home. And there are always good rats in need of homes. If there aren’t any here at the Humane League, rat rescues are almost always at capacity, and you can usually find them on petfinder with a quick search.

Rats are fun, friendly, smart, and a drain on the wallet… but that’s what being a good pet is about, isn’t it? When I come home to see my rats all waiting to give me snuffly little kisses, I couldn’t imagine a more perfect pet.