The State College-based construction and paving company has been paid more than $1.7 billion for state projects. 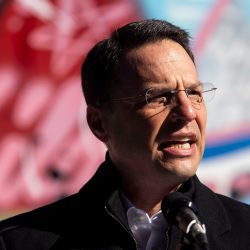 HARRISBURG — A major Pennsylvania government contractor has been accused of siphoning millions of dollars in retirement and health benefits from its employees, state authorities said Thursday.

Glenn O. Hawbaker, Inc., a State College construction and paving company that has been paid more than $1.7 billion for state projects, was charged Thursday with four counts of theft for allegedly violating state and federal labor laws requiring all employers that receive state or federal funding to pay workers the same rate in wages.

The charges, the result of a three-year investigation by the state Office of Attorney General, allege that the company circumvented the state’s Prevailing Wage Act, as well as federal labor law, by using more than $20 million in retirement and other benefits meant for its employees to lower its costs and increase profits.

“They fleeced workers to put more money in their pocket,” Shapiro said during a news conference to announce the charges. “They were engaged in a massive, unprecedented fraud.”

In a statement, the third-generation, family-owned company noted said it had “cooperated fully” since becoming aware of the attorney general’s investigation. Shapiro confirmed the company was cooperating with investigators.

“While we believe that we have always acted in accordance with all state and federal laws, in an abundance of caution, the company immediately changed its prevailing wage practices,” the statement read. “These changes remain in effect today as we continue to do what’s right for our employees, both past and present. Our company will continue to work constructively with the attorney general’s office to reach a swift resolution.”

According to its website, the business operates 21 quarries and seven asphalt production facilities across Pennsylvania and southern New York.

Shapiro’s office said that under state and federal law, contractors who have to provide level wage rates can satisfy a portion of that requirement by instead giving their employees so-called fringe benefits. That fringe benefit credit, as it’s known, is calculated by determining the hourly equivalent of the value of the benefit to the contractor.

Shapiro’s office said Hawbaker allegedly stole wages from its workers by using money intended for prevailing wage workers’ retirement funds to contribute to retirement accounts for all Hawbaker employees, including its owners and executives.

As a result, those workers received less money in their retirement accounts than what was owed.

Hawbaker also allegedly stole funds intended for prevailing wage workers’ health and welfare benefits, using it instead to subsidize the cost of the self-funded health insurance plan that covers all employees. Authorities allege the company disguised the scheme by artificially inflating its records of benefit spending by millions of dollars each year and claiming credit for prohibited costs.

Those measures created the appearance that it provided employees with benefits that far exceeded the cost of those that it actually did, state officials said.